The Serpent Uses its Lying Nature to Separate Humanity from God 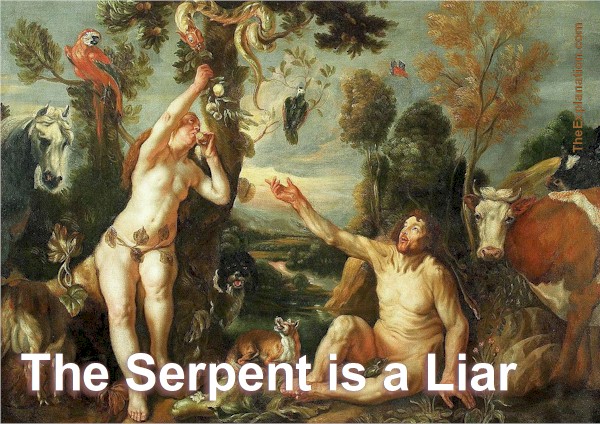 I have no idea what Adam and Eve, or the Serpent resembled. But the Bible is clear about the Serpent’s nature. The Serpent is a liar.

The Serpent is the third character in our play, along with God and humanity. This Serpent has a sinister goal: to trip up humanity and remove them from God’s presence. As much as God wants humankind WITH Him, the antagonistic Serpent wants humankind WITHOUT God.
(Origin of the Universe, chapter 5.8)

What we see here is just an overview to immerse us in the three main characters of our play. I’m giving you some overall principles without going into all the supporting Biblical contexts. After presenting the Serpent, we shall get into Genesis 1.1, and corroborative contexts will be forthcoming.

You can follow along by using the online Bible, the Interlinear Bible, Strong’s Concordance and the Hebrew/Greek Concordance at UnlockBibleMeaning.com
If you’ve come across this blog post for the first time, then please know that it is part of a larger work. To see the entire context, which you can read online, click here.
Dig for Bible Study gems to enhance your understanding: See ‘Further Study’ suggestions at the end of this blog post.

In the blog post a couple of weeks ago, we saw that in Genesis 3:1, it indicated the serpent was more subtil than any beast of the field. We saw that the original Hebrew is arom and corresponds to H6175 for which the following KJV translations are: subtil, crafty, and prudence. I pointed out this opposition: Adam and Eve had positive prudence while the Serpent had negative craftiness.

Two verses in the book of Job (amongst others) confirm this negative subtlety that animates the Serpent:

He (God) disappoints the devices of the crafty, (H6175) so that their hands cannot perform their enterprise.

The Serpent’s mind frame is just the opposite of Adam and Eve; he is full of cunning. Arom in this context is ‘usually in a bad sense’ as we saw in Strong’s H6191, and in the case of the Serpent, always in a bad sense; our foe is a clever devil, dark-minded, blemished comprehension. He does not of lucid thinking is not based on pure thoughts and positive notions.

We already have seen the subterfuges the Serpent used to seduce, cajole, lure and fascinate Adam and Eve into believing they were such wonderful specimens replete with all the wisdom to lead their children and descendants into happiness and tranquility. After all, if such a charismatic individual finds Adam and Eve ‘special’ beyond even God’s attention, how can they resist? They must be gifted.

Unfortunately, that sought after and promised peace and prosperity didn’t happen, as we’ll see from their story, and it isn’t happening as we see from our contemporary history in the 2nd volume of The Explanation series, Audit of the Universe.

If I have to take one biblical word and notion to describe the Serpent’s actions and behavior, it would be a Liar.

And the Bible calls the Serpent just that. Later, we’ll see his original nature, and how his character changed, how he transformed into a calculating taleteller of untruths.

You (referring to the Pharisees) are of your father the devil, and the lusts of your father you will do. He was a murderer from the beginning, and abode not in the truth, because there is no truth in him. When he speaks a lie, he speaks of his own: for he is a liar, and the father of it.

In future blog posts, we’ll see how the serpent slipped into negativity and ended up with this attitude.

If I have to take one biblical word and notion to describe the Serpent’s actions and behavior, it would be: Liar. And the Bible calls the Serpent just that. Later, we’ll see his original nature and how his character changed. Click To Tweet

Suffice it to say the basics of right and wrong—in this Genesis narrative—revolve around the Tree of the Knowledge of Good and Evil, which the Serpent manipulates Humans into eating from, not because he’s benevolent, as we’ve seen. The Serpent uses ‘lies’ as the basis for his subversive operation. Lying and untruths are his main product. One hundred percent is artificial, with one powerful additive. The lies are believable, credible, plausible, and in some respects, delicious, sugar-coated, soooo believable that people are so engulfed, entangled in these lies that they can’t believe they’re UNtruths.

So what’s happening here, what is the result of instilling confusion in Adam and Eve’s mind to the point of convincing them to eat that which God had forbidden them?

Remember, we stated the Serpent’s goal—the opposite of God’s purpose—God wants humans WITH Him, while Satan wants humans SEPARATED from God. He wants humanity to consider God as either non-existent fiction or some overbearing ogre.

The Serpent’s goal—the opposite of God’s goal—God wants humans WITH Him, while Satan wants humans SEPARATED from God. He wants humankind to consider God as either non-existent fiction or some overbearing ogre. Click To Tweet

We can translate the Serpent’s Biblical-speak for the modern audience:

‘God is misleading you. He is keeping this fruit from you. He gives the orders, and you obey. That’s nonsense. He tells you what to think. This Tree is good, that Tree is bad. He tells you what to eat. You can’t eat that. He’s a tyrannical power-wielding bully who tells you what decisions to make. Eat of this Tree, not of that Tree. He shackles you with a bummer trip, and he says, You will definitely die’.’

The serpent’s discourse is a classic lesson on how to create a rift between two people. And as we see, he succeeds.

They become aware, somehow, that they don’t want to see God.

When the curtain rises on the next scene of God walking in the Garden, we find Adam and Eve hiding; this isn’t a fun game of hide-and-seek; to the contrary, humans need to put distance, a barrier between themselves and Him. They want to hole up and stay away from God. They have a specific role in this play, and they won’t speak the lines. The Serpent, in effect, has told them they are the stars, producers, and directors. Humanity wants to develop its play. It has set itself apart from God in every sense; Satan has reached his goal indeed.

As the contexts of the verses point out, they can’t escape the presence of God even though they conceal themselves. God does eject them from the Garden and set guards at the entry to prevent them from returning.

Galacti is sitting there a bit stunned while considering these pieces.

‘The villain won in this morality play. What kind of story is that? I thought this was an uplifting story. He manipulated events, so God ejected humans into suffering and adversity. What a victory for the Serpent. Is that the message we want to send? Crime does pay, and duplicity, half-truths, and outright lies pay handsomely?’

Upon more profound thought, Galacti understands that the Serpent’s goal is to separate God from humankind—why? For the pure fun of it? And how about God? He has to furnish a lot of answers. He is all-powerful. He represents love, how can He lose? He lets the Serpent play out his scheme, and as a result, God has to oust humankind, effectively separating them from His presence-protected Garden. Humans even get the rotten end of the deal, as though they’re pawns moved around the board at will, a ball in a soccer game kicked around at whim—and it looks like the Serpent is winning the match. What kind of God is that?

Why didn’t God make it ‘easier’ rather than more difficult with the Serpent on humanity’s back? If God is good (that’s what the ‘fairytale’ biblical narrative says), how can evil be so rampant, how can pain, suffering, war, hunger, anguish, and crying fill our existence? If God cannot do evil, where did bad originate? How can there be a villain in God’s world? Why didn’t God eliminate the villain before he got to the villain stage? Why didn’t He eradicate the rogue afterward? Why does the Benevolent tolerate the dastardly?

There’s a lot of explaining to be done. But the audience wants a sequel to the play.

This blog post is an excerpt from  chapter 5.8 of the book Origin of the Universe

Click here and reread the Further Study at the bottom of the page to see that H6175 corresponds to ‘guile.’ It is this trickery that animates the serpent and continually motivates it to oppose God’s plan and humiliate humankind.

For further study, follow this link for a short video course entitled The Story of Two words: Naked and Subtle … Translated from One Biblical Hebrew Word. It’s FREE and very instructive.

Since you read all the way to here… you liked it. Please use the Social Network links just below to share this information from The Explanation, The Serpent Uses its Lying Nature to Separate Humanity from God