What on Earth is Humankind doing?  In Beginning there were No Humans 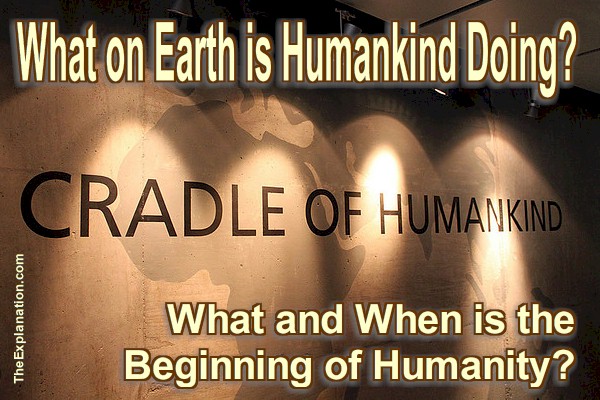 Humankind on Earth – according to present knowledge, humans are unique in the universe. Is there a goal for Humankind? What are we doing on Earth?

What on Earth is humankind doing? How and when did humanity begin? Basic questions. Here are the answers.

In beginning, there was no humankind. That in beginning is not a grammatical error; it is deliberate. To understand, you’ll need to continue reading this and subsequent blog posts to understand ‘the’ beginning of humankind.

It looks like we have a classic drama. The goodies and the baddies with the main character, humans, a.k.a. You and I, caught in the middle. Well, maybe not exactly, because from what we’ve just seen, humans appear to be leaning heavily towards Serpent territory.
(Origin of the Universe, chapter 5.9)

You can follow along by using the online Bible, the Interlinear Bible, Strong’s Concordance and the Hebrew/Greek Concordance at UnlockBibleMeaning.com
If you’ve come across this blog post for the first time, then please know that it is part of a larger work. To see the entire context, which you can read online, click here.
Dig for Bible Study gems to enhance your understanding: See ‘Further Study’ suggestions at the end of this blog post.

Humanity in the muddied and muddled middle

We shall go into the details, but when I say heavily leaning towards Serpent territory, what I’m also saying is ‘leaning away from God’s territory.’ If I put this in yet other terms, this means humankind taking its destiny into its own hands: No God, no Serpent. It means placing humanity at the helm. Humankind sets its own goals, finds, and makes its way on Earth. Humanity is sufficient in itself, in its own intelligence and capacities. The last two chapters of Audit of the Universe: What Humans Accomplish and How Humans Reason (both chapters will be online shortly) expound and corroborate this aspect of humanity.

Humankind is taking its destiny into its own hands: No God, no Serpent. Humanity places itself at the helm. Humankind sets its own goals, finds and makes its own way on Earth. Click To Tweet

Here are just a couple of examples of this Independent Earth concept. Of course, I don’t know what the motivation of these people is and even whether they intended their works to portray this self-sufficiency of humanity. All I’m saying is that humanity’s goal is to make the best of their life on Earth without any help or intervention other than from themselves. 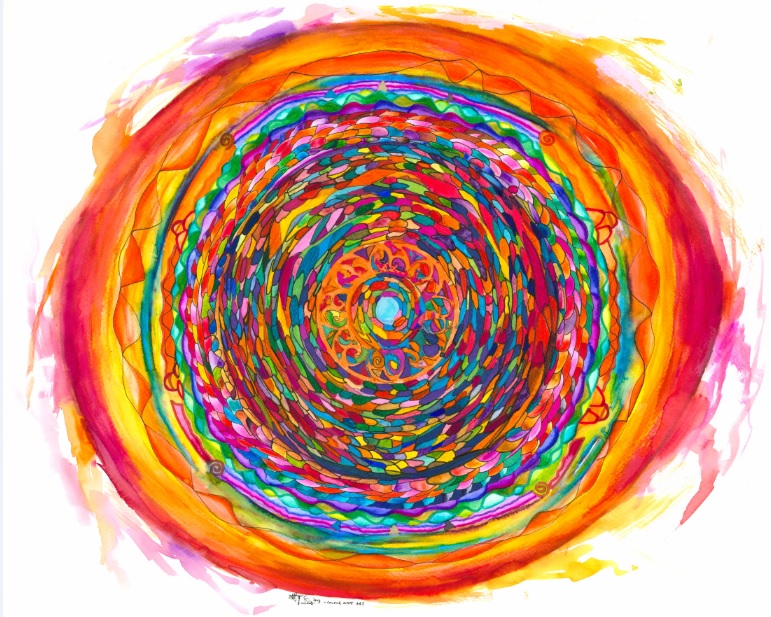 Here’s the Flag of the United States of Humankind created by the Italian artist Matteo Sica. This artwork represents the diverse and beautiful patchwork of Earth’s population, where each piece, namely nations, and individuals, contributes to the beauty, harmony, and liveliness of our life on our Mother Planet.

We are going to see this human egotism in many other areas. Here’s a blog post that focuses on the human body and a book stating that with scientific findings today, we do not need any spiritual or invisible outside facts to explain the entirety of a human being. Essentially, what the author is saying: Humans are self-sufficient of and by themselves. The upcoming chapter on Brain and Mind in Audit of the Universe will include several proponents of this identical concept.

Yes, humankind is in the muddied middle, not mindful of its real place in the entire puzzle picture.

What’s the Real Goal for Humankind?

According to the Bible, humankind’s future ties in intimately with what God has in mind—after all, God (even considering the story as fairytale) is the most powerful and the author, producer, and director of this play. He’s a dramatic character that acts, and we already saw His goal: To have humankind WITH Him—in the Garden of Eden.

According to the Bible, humankind's future ties in intimately with what God has in mind. He’s the producer, and His goal is: To have humanity WITH Him—in the Garden of Eden. Click To Tweet

In drama, plots often take twists, and this one certainly does, with the Serpent intervening and seducing humankind to turn their back on God. However, God’s ultimate goal remains unchanged: Bringing humans BACK into the Garden of Eden. And God has a plan to do this, a longtime devised method that He exposed in this best-seller mystery thriller called the Bible–that many take for truth and many for fiction and that many others question.

God’s ultimate goal remains unchanged: Bringing man BACK into the Garden of Eden. And God has a plan to do this, a longtime devised plan that He exposed in this best-seller mystery thriller called the Bible--that many take for… Click To Tweet

This epic tale of humanity is chock-a-block with spice, tension, and conflict. How does God move man, outfitted with free will and dogged by the original villain of the world, to reject the Serpent’s scams and make an independent decision to lean to God’s territory and come over to His team?’

How does God move man, outfitted with Free Will and dogged by the original villain of the world, to reject the Serpent’s scams and make an independent decision to lean to God’s territory and come over to His team? Click To Tweet

Quite a program, quite a script, but it is God’s plan, and humankind’s goal is tied up in that plotline. Galacti wonders: How can all humans–past, present, and future–be sure of who and what God is, now that they are confused, bothered, and bewildered?

Surprise! Onstage is a hologram of two ancient Indus Valley and Nile River citizens, so strange to the audience’s mind but not Galacti’s, with his historical database review.

There is a reason these Indus Valley Mesopotamian and ancient Egyptian individuals have appeared. We estimate that since the first civilizations arose in the Indus Valley, around the Nile, and in Mesopotamia some 6000 years ago, about 106 billion people have walked, or at least been born on, the face of the earth.

Sam’s Reflections Quite a few babies and infants have been born and lived—but not long enough to learn to walk. They’re ‘mankind’; surely then, they too should have the chance to come back into the Garden of Eden. God is an impartial God—or He isn’t. He can’t just leave out a chunk of humanity because they didn’t reach a particular degree of maturity. Every last human being is involved. Including our Indus and Nile River characters. However, they are too stunned by all this and leave the stage as quickly as they came.

In any case, Galacti realizes that although we don’t need insight from 4000 B.C., it would be helpful to step back in time to the real beginning of this fairytale and see what the past prologue and future shows about the origin and destiny of humankind. We’re going to scrutinize possibly one of the best known and least understood pieces of literature that exist: Genesis. He now knows who the main characters are with their interrelationships. Galacti is now eager for the curtain to rise and see how the play develops—from the beginning.

Into the Bible, starting with Genesis 1.1

And so, finally, after two-and-a-half books I’ve given the background (Inventory of the Universe, Audit of the Universe) and reasons for delving into the Bible and not using theologians to find the answer to the question: How can peace and prosperity be established on Earth?

1 In the beginning God created the Heaven and the earth.

The author jumps right into the story with two verses of background to set the stage—but what a stage. It is a given that God exists, as well as creation, the state of that creation, and the presence of a Spirit.

Take a deep breath and remember—consider it a fairytale if you want to.

Let’s scrutinize some of this preface before we can move on. This briefest of brief introduction is vastly expanded and given substance by many other passages further on in the Bible—we need to bring it together, to lay the first brick in our edifice.

The very first Hebrew word (be-resheet), which lends its Greek translation, Genesis, to the title of this book, does not say, in the beginning. The is a definite article meaning a specific, particular, one, and only beginning. The Hebrew states, in beginning. The implication is that there is more than one. Yes, at least two, maybe multiple beginnings. (see Further Bible Study below)

What we see in Genesis 1.1 is one of the beginnings, an important one, indeed. This specific beginning is when a particular event took place: the creation of the heavens (in Hebrew, this is plural, shamayim) and the earth. The heavens and the earth do take the definite articles the, so we know to what they’re explicitly referring.

This blog post is an excerpt from chapter 5.9 of the book Origin of the Universe

Check out that first-word beresheet of the Bible at UnlockBibleMeaning.com It’s the Biblical Hebrew word בְּרֵאשִׁ֖ית. When you click on H7225 for the Strong’s reference, you’ll see רֵאשִׁ֖ית without the ‘בְּ.’ The ‘בְּ’ is ‘in’ not ‘in the.’

By comparison, a little further on is הַשָּׁמַ֖יִם for the heavens. Click on H8064, and you’ll see the word heavens is  שָּׁמַ֖יִם without the ‘הַ.’ The letter ‘hay’ signifies ‘the,’ a definite article that is not present in בְּרֵאשִׁ֖ית Hence the conclusion that we’re talking about a beginning; not the beginning.

It might sound like a moot point, somewhat irrelevant, but it’s necessary to start on the right foot. Did you know that scientists refer to five mass extinctions of life on Earth? That doesn’t mean the extermination of all life from the planet. But, it does mean there followed, however many years later, ‘a’ new beginning. None of which was the actual first beginning.

The point being that Genesis 1.1 indicates there is more than one beginning. Science tells us the Universe began some 14 billion years ago, and the Earth began some 4.5 billion years ago. These events are related. Think about it because starting next week; we’ll discuss the first beginning and later a second beginning.

Since you read all the way to here… you liked it. Please use the Social Network links just below to share this information from The Explanation, What on Earth is Humankind doing?  In Beginning there were No Humans