Deity and Sound, Reasoned Words are the Crux of Theology 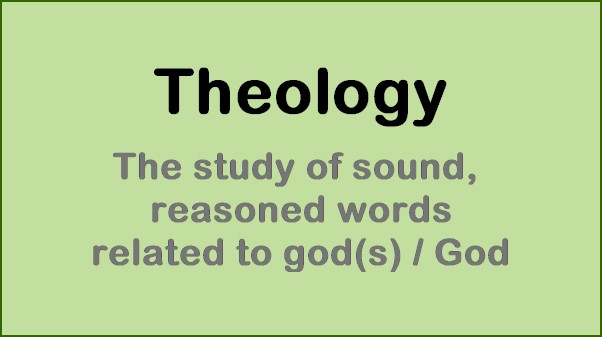 Do we spell Deity with a small ‘d’ (deity) or a capital ‘D’ (Deity)? Whoever this might be, can they pronounce and transmit reasoned words? That is the meaning of Theology.

Theology is the study of sound, reasoned words related to god(s) / God the Deity.

Deity refers to the one or One who transmits a message. Theology is the study of sound, reasoned words related to god(s) / God. Specifically to Deity, God.

The Crux of Deity in Theology

Remember our fundamental question: How is it possible to establish Peace and Harmony on Earth and in the Universe? Well, this is not the primary question! The first question to ask is:
(Origin of the Universe 1.2)

WHY do we even want Peace and Harmony on Earth?

WHY is that our goal? After all, why not have Conflict and Discord or other configurations?

Who alone can give the ultimate answer to this question? And I mean the final REAL, CORRECT answer. I’ve already concluded in Audit of  Humankind, that experience, philosophy, science, and religion have given us all sorts of solutions, but who knows for a certainty which, if any, of these human answers has any worth?

So, we take a look at Theology. Here are the first two paragraphs of the definition of Theology, according to Wikipedia. I cite this source, not because it’s the best or worst, but only because it’s readily available to all of us.

Augustine of Hippo defined the Latin equivalent, theologia, as “reasoning or discussion concerning the Deity”; Richard Hooker defined “theology” in English as “the science of things divine”. The term can, however, be used for a variety of different disciplines or fields of study.

Theology begins with the assumption that the divine exists in some form, such as in physical, supernatural, mental, or social realities, and that evidence for and about it may be found via personal spiritual experiences and/or historical records of such experiences as documented by others.

The study of these assumptions is not part of theology proper but is found in the philosophy of religion, and increasingly though the psychology of religion and neurotheology. As a science, theology aims to structure and understand these experiences and concepts, and to use them to derive normative prescriptions for how to live our lives.

I have not highlighted anything in the above quote because I would like you to come to your conclusions.

Here are my conclusions about this definition:

I’m going to resume this in short by saying this Wikipedia description of theology is academic and indeed incorporates the four ways humankind reasons (experience, philosophy, science, and religion) to reach answers.

In short, this definition of theology gets us no further than where we were at the end of Audit. It says that theology is humankind’s reasoning about the divine. Put another way; it’s the tail defining the head. The opening paragraph of the definition of Wikipedia says as much:

Augustine of Hippo defined the Latin equivalent, theologia, as reasoning or discussion concerning the Deity. At least there’s a capital D.

The Explanation does NOT (for emphasis) define theology this way.

How The Explanation defines Theology

Further down the Wikipedia page, we can find the etymology of theology:

Theology translates into English from the Greek theologia (θεολογία) which derived from Τheos (Θεός), meaning God, and -logia (-λογία), meaning utterances, sayings, or oracles (a word related to logos [λόγος], meaning word, discourse, account, or reasoning) which had passed into Latin as theologia and into French as théologie.

The above is correct, but then it adds: Greek theologia (θεολογία) was used with the meaning “discourse on god” in the fourth century BC by Plato.

No doubt Plato and others talked a lot about god, as I said, the tail wagging the dog; this is not The Explanation’s point of view.

Let’s look at the word theology, with its two distinct parts: theo and logy.

Right away, we run into a thorny issue: The existence, or not, of some higher power. Then, if we agree, there is one: The nature of this higher power. If we took a poll on this, we’d get every idea under the sun—and then some. A factor of belief comes heavily, into play—and this is a very personal feeling that characterizes each one of us. As the author of this book, I want to respect your beliefs about G/god, science, religion, or any other concept or lack thereof.

However, we have taken a step in the direction of some higher power when we decided that none of the four key ways humankind reasons (experience, philosophy, science, religion) is fully working.

Theology means we continue in the direction of a ‘higher power’ fully aware that we don’t know if this ‘G/god’ even exists and that this power has yet to be defined.

The 2nd part of theology is -logy

Logy has to do with the study of or language and discourse around a particular subject. In this case: god(s) or God.

We find a related word as part of ‘logy’: logo

As you can see, this word is related to sign, character, word, phrase, shorthand, and writing systems. All of this is part of the study of language and discourse, as we saw above. We see company logos everywhere–one identifying sign, frequently without even a word–and we know to what or who it refers precisely.

Theology is: the sign or set of signs, characters, words, phrases, in short,
the writing system that identifies and expounds god(s) / God.

I’m going to go a step further here because within this concept of logy and logo, we find a familiar English word: logic.

Middle English logik, from Anglo-French, from Latin logica, from Greek logikē, from feminine of logikos of reason, from logos reason (Merriam-Webster definition). Merriam goes on to add this:

When we consider these concepts we can define theology as the study of words related to God. But not just any words, instead sound reasoned words.

The Explanation is NOT about humankind’s words about a deity. That’s what Wikipedia and the Science of Theology do.

The Explanation IS about the sound reasoned words of God. What does God have to say? What is His reasoning? Why does He want Peace and Prosperity? It’s only the ‘Source’ that can really give real solid answers.

Theology, as seen by The Explanation, refers to the word of the source. The source being a god with small or capital g. Since it’s generally associated with religion and its originator, it comes with a capital G. I don’t expect non-believers to accept the capital G or even to believe that God has or could transmit the answers to the fundamental questions of life.

The Explanation is about the 'sound reasoned words of God.' What does God have to say? Click To Tweet

What I’d say here is: You’ve listened to just about everything humankind has to say about d/Deity–why not give an ear to what Deity ‘might’ have to say?

This blog post is an excerpt from chapter 1.2 of Origin of the Universe

Since you read all the way to here… you liked it. Please use the Social Network links just below to share this information from The Explanation, Deity and Sound, Reasoned Words are the Crux of Theology