Women in the Bible, Strangest Creation Story. Discover Why 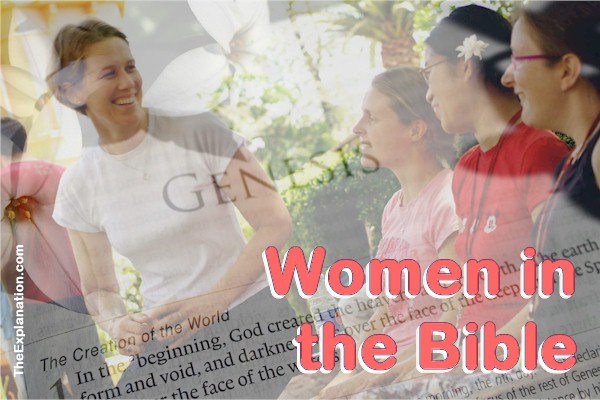 Women in the Bible starts as the strangest creation story of all time. So many mysterious details. Why?

Women in the Bible. The most mysterious part of the creation story. Why did God choose this strange way of bringing the woman into the world?

Women in the Bible is a controversial subject. The creation story fills her beginning with mysterious and unexplained details. Until now. The female presence completes the story of creation. It’s the final crowning piece. Without the woman, God’s plan is impossible. Start to understand why.
(Origin of Woman, chapter 2.1)

The last eight verses of Genesis 2, verses 18-25, (about women in the Bible) are what I consider some of the most fascinating verses in the Bible. We are going to take our time to dig out Bible meaning. The reason being, these verses present a scenario so out of sync, so strange, that it’s no wonder Bible readers have difficulty understanding them and Bible critics have a heyday pointing out the ambiguities.

17 But of the tree of the knowledge of good and evil, thou shalt not eat of it: for in the day that thou eatest thereof thou shalt surely die.

18 And the LORD God said, It is not good that the man should be alone; I will make him an help meet for him.

Last week The Explanation with Sam Kneller reached its 400th blog since starting in May 2014. The idea for this commentary on Genesis, that’s what The Explanation series is, started at least five years earlier. Originally, only one book, with three sections, Inventory, Audit, and Origin, was envisioned. That has turned into five full-length books and is still growing. The 400 blog posts are the five books, so, everything is available online. The idea is to turn them into ebooks and printed editions, but there is a lengthy process of editing and finances involved.

The Universe is like a correctly assembled jigsaw puzzle composed of billions of pieces, each one perfectly fitted with its immediate neighbors and its far-flung counterparts. It’s a fantastic assemblage when we step back to contemplate it. This ensemble is what I’ve coined as coherent completeness; this is the correctly assembled billions of pieces of the jigsaw puzzle.

Origin of the Universe starts with a dive into what theology is and how The Explanation approaches it. Then comes the 7 Keys to Master Biblical Hebrew, a Study Method to Unlock Bible Meaning. The Biblical Hebrew is the crux of the matter. We’ve seen this on many an occasion (examples). You cannot FULLY understand the Bible, let alone women in the Bible, in your native language, which is a foreign language when it comes to Biblical Hebrew.

You can only put the puzzle together FULLY with the help of the original language and coherent completeness. Genesis 2:18-25 is a prime example of this. I’ve given this lengthy, seemingly unrelated introduction to these verses because I’ve desired to give you The Explanation of these verses for a long, long time. And finally, here we are.

These verses, about the creation of woman, the beginning of the story of women in the Bible, are the capstone of God’s creation. They represent the WHAT, the HOW, and the WHY for His creation. And these verses are skimmed over with practically no thought given to the depth of their teachings. We are going to stop and learn.

The first aspect of learning is their context. And that is what this post is devoted to; to explaining the incongruences that most have not noticed here. We’re going to look at how jumbled and incoherent this context appears to the casual Bible reader. Here are some questions to ponder. Each issue is like an individual, separate piece of the puzzle. Your goal is to assemble them flawlessly!

As we move into the final episode of the creation story, which ends Genesis 2, we will have a complete tableau of God’s Plan. All the characters of our Universal Play will be on stage, and their roles will be clear. In this blog post, we’ve stepped back to grasp an overview. This conclusion broaches two global subjects.

Firstly, with the creation of the woman does her role coincide with what we find in contemporary life? Many have the impression that the Bible, in particular, Genesis, written some 3500 years ago, has no relevance for society today. Today, if there’s a controversial subject, it is that of women in society. What their role is and how to treat them daily headlines. There is relevance between women in the Bible and women today.

Here’s a list of deplorable but prevalent crimes against women. We even find them committed against women in the Bible. The authors did not hide crime; it’s there in black and white for our improvement. One of the reasons is that humanity does not know what the role of a woman is. And, certainly doesn’t respect that role. Women’s movements, women’s rights, #metoo, gender issues. Harassment, Violence against women: Acid throwing, Breast ironing, Dating abuse, Domestic violence (pregnancy), Eve teasing, Female genital mutilation (Gishiri cutting, Infibulation).

The Explanation has discussed the basis of these issues in Audit of the Universe, I devoted a chapter to How Humankind Socializes, and pulled together a few articles with the hashtags #AuditWomen #AuditFemale #AuditGirls.

We are going to see that Genesis 2 establishes the basis of what a woman is and her vital role in every aspect of society.

Secondly, in today’s atmosphere of biting criticism and controversy that surrounds God and the Bible, this context is evidence that this Book is a Sacred Book. It contains jewels of information that you can not find anywhere else. The Bible narrative, written 3,500 years ago, is contemporary and reveals a story flow from Genesis to Revelation.

We’re not discussing a “bunch of fabulated memories thrown together and pawned off as something divine.” It is the Word of God, our Creator, Who establishes and transmits to us His Plan from the beginning (Genesis) to the end (Revelation). This context about the creation of woman encompasses the entire Plan of God, the whole history of humankind, past, present, and future. Of and by itself the creation of woman is coherent completeness.

Next week we will get right into this fascinating story of women in the Bible. The Explanation will answer ALL the above questions and show you how ALL the pieces in the puzzle fit together perfectly.

This blog post is an excerpt from chapter 2.1 of the book Origin of Woman.

For those who want to meditate on the above questions and how to give Biblical answers, not human conjectures, here’s the clue. One of the keys to mastering Biblical Hebrew is the literal represents the symbolic; the physical represents the spiritual. The man and the woman prefigure Christ and the Church. You can use the free Bible tools at UnlockBibleMeaning.com to see the meaning of the Hebrew words in the Genesis 2 context. But, primarily focus on the relationship of Christ to the Church. The Preeminent to the Eminent.

Since you read all the way to here… you liked it. Please use the Social Network links just below to share this information from The Explanation, Women in the Bible, Strangest Creation Story. Discover Why