Can Satan Influence and even Corrupt a Human Mind? Yes 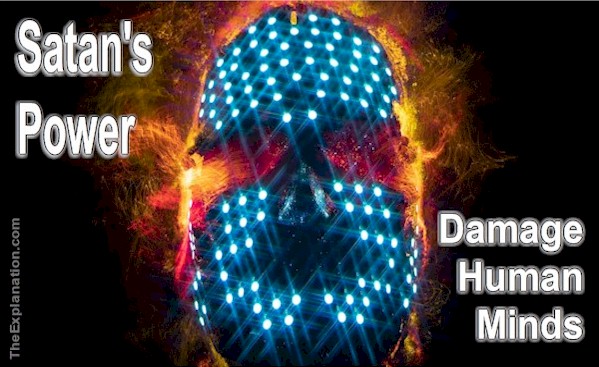 Psychology is about influences on our consciousness and mind. Satan the Devil labors at that to damage humans to its utmost.

The Serpent’s goal is to weaken, break, and rip apart the link between humans and God. Let’s be brutally honest; it’s done an excellent job! That’s not my evaluation; the Bible tells us this. We have to broach a challenging but necessary subject. Our mental stability depends on it. In the last chapter, we discussed warring Proverbs. It is war, and there’s a serious fight going on that most are not even aware of.
(Mind-Body Problem Solved, Chapter 41 – Table of Contents)

Psychology doesn’t know what the mind is nor what the battle for human minds is. It’s spiritual warfare. It’s not my intention to use exaggerated scare tactics, but it’s time to wake up. The Apostle Paul, inspired by God, writes, “For we wrestle not against flesh and blood, but against principalities, against powers, against the rulers of the darkness of this world, against spiritual wickedness in high places” (Ephesians 6:12).

Scripture is point blank about the origin of potent evil influences all humans are subject to. They are spiritual, just like the mind and consciousness. It’s not a question of maybe; this is reality. Unfortunately, such affirmations are considered nonsense in many, probably most circles. If you don’t even identify your opponent and know what weapons they’re wielding, you’re at a terrible disadvantage. That’s the general case today and a primary reason for our degrading mental health. Paul is explicit in designating the enemy.

Satan uses obscure observation, phony philosophy, distorted science, and irreverent religion to bewilder the minds of humans. This section about practical psychology would be amiss not to address this phenomenon. the thrid section of the book Agony of Humankind and the Antidote, on Serpent Influence elaborates on all these areas. This chapter drives this point home. The Serpent is out for mind control.

It is pulling out all stops to inflict as much harm as possible. The Apostle Paul warns the Church in Ephesia about this phenomenon. The following verses contain important principles about the Serpent and its combat against humankind. Given the available space, all I can do is give you a peek into its depth. I invite you to deepen your understanding using the Bible study tools at UnlockBibleMeaning.com.

In Ephesians 2, we find the Serpent’s rulership (prince), as well as its authority (power) to assume its role. We see the means (spirit) by which Satan accomplishes its task and the medium (air) where it functions. We winess the specific areas of humankind Satan targets (flesh, mind), and finally, its worldwide influence (nature, children of disobedience, wrath).

ἄρχων archōn ar’-khone; Present participle of G757; a first (in rank or power):

πνεῦμα pneuma pnyoo’-mah; From G4154; a current of air that is breath (blast) or a breeze; by analogy or figuratively a spirit that is (human) the rational soul (by implication) vital principle mental disposition etc. or (superhuman) an angel daemon or (divine) God Christ’ s spirit the Holy spirit :

σάρξ sarx sarx; Probably from the base of G4563; flesh (as stripped of the skin) that is (strictly) the meat of an animal (as food) or (by extension) the body (as opposed to the soul (or spirit) or as the symbol of what is external or as the means of kindred or (by implication) human nature (with its frailties (physically or morally) and passions) or (specifically) a human being (as such):

διάνοια dianoia dee-an’-oy-ah; From G1223 and G3563; deep thought properly the faculty (mind or its disposition) by implication its exercise:

φύσις phusis foo’-sis; From G5453; growth (by germination or expansion) that is (by implication) natural production (lineal descent); by extension a genus or sort; figuratively native disposition constitution or usage:

ὀργή orgē or-gay’; From G3713; properly desire (as a reaching forth or excitement of the mind) that is (by analogy) violent passion (ire or [justifiable] abhorrence); by implication punishment:

The Serpent occupies the position of a prince, 1st rank on Earth. Lucifer was a top-ranking archangel until its fall. Satan has the power, competency, authority, privileges, and jurisdiction, among other things, over the air. The air refers to Earth’s atmosphere. Satan uses the power of its toxic spirit carried through the air. Paul is talking spiritually, but technically this is how the Serpent works. It transmits its influence via AIRwaves.

You might think this is ridiculous, but The Explanation spent a lot of time, in the context of the human mind expounding the nature of God’s Holy Spirit, what ruach is and how it functions. The fluttering, moving, shaking fluctuations of waves and frequencies. Now we see the Serpent is Master of the Air. Satan also has its frequencies. It broadcasts directly to the human mind (G1271), where the imagination is. It incites the flesh (G4561), as discussed in Agony regarding UNethical behavior. Through their influenceable human nature (G5449), people everywhere are pulled down by convincing publicity and other harmful influences and end up following their basic instincts, their passions (G3709).

These two verses express the Agony of Humankind. Please don’t get me wrong. We can NOT blame Satan for all of our wrong-doing. Why? Because we possess free will. As such, we can and should make the right decisions to WITHSTAND these temptations. But we are weak flesh, and more often than not, we succumb to these passions.

Do you think The Explanation exaggerates when it says Satan has mind control worldwide? Reread verse 3, “Among whom also we all had our conversation (an old English word for behavior) … and were by nature  the children of wrath, even as others.” Paul includes himself (we)  and says, we ALL, ending the verse with as others. Those others were ALL people not associated with God’s Church, of which Paul was an Apostle. In other words, everyone worldwide. Numerous other verses, including verse 2, according to the course of this world, corroborate this. I invite you to search them out and study them.

The spirit world exists and manifests itself

Whether you believe the Bible or not, Satan and its shenanigans are part and parcel of the package. The spirit world exists. Satan is real, it rebelled against God Who cast it and its cohort to Earth, where they continue their odious work.

3 But if our gospel be hid, it is hid to them that are lost:

4 In whom the god of this world has blinded the minds of them which believe not, lest the light of the glorious gospel of Christ, who is the image of God, should shine unto them.

You can’t get much more precise than that. The Serpent is the god of this entire world; Satan has blinded the MINDS of those who don’t believe. Today, fewer and fewer believe, and even among those who do believe, what do they believe? The Serpent has got the upper hand through mind control. Here are some of its methods. There’s no space to go into a lot of detail. There are links to further information, but I insist do NOT get involved in these activities. There are some amazing testimonials about what Satan can do; this is real BUT to be avoided.

You don’t have to be a Bible believer or reader to know such spirit phenomena exist. Elizabeth Gilbert investigated this and gave a TED talk, which has over 19 million views. Ruth Stone also knows there’s something to the spirit world; these are two rational human beings.

In New York, in 1976, there was a spree of murders. Police apprehended a man going by the name son of Sam. He was convicted and sentenced to life imprisonment, where he still is today. In prison, over the years, he got his life together. I debated whether to include one of his testimonial videos and decided to do so. Today, David Berkovitch, his real name, is very lucid and open about his horrific experience. Here are a few quotes.

My life and personality were coming apart, disintegrating, being controlled by other entities that I opened myself up for. I had a propensity for that, all my life, because of the experiences I had in childhood. The trauma and everything. It opened up the door to demonic strongholds being set up in my life.

Both these videos are eloquent in the admission of a spirit world. Furthermore, it is evident; they target mind control. People, no matter who they are or where they are, should be aware that such activities should be avoided. Again, the Apostle Paul said in 1 Corinthians 14:32, “And the spirits of the prophets are subject to the prophets.” Be it prophets or you and me, we are to be in control of our spirit, our mind at all times. Our mental health stands on that foundation. The next chapter will give the foundation for wholesome mental health.

Other malevolent phenomena to avoid

Practices that invoke potent forces from the Earth

We can add two more circles with Satan’s influence on our consciousness and mind. This includes Satan’s “spirit that now works in the children of disobedience” (Eph. 2:2), illustrated by the pink background. 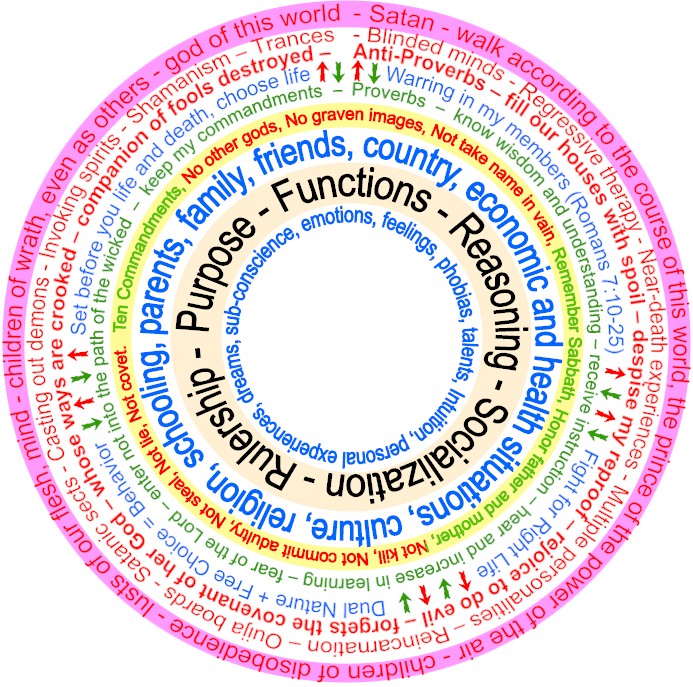 Other areas, too vast to mention, make people susceptible to mind attacks by Satan, like violent music, festivals, weird diets, purges, abstinence, spiritual and Eastern philosophies.  it has multiplied the practices and methods. There’s one for every type of the 7+ billion minds on Earth today. And, unbeknown to most, the ways it uses look like valid remedies and real help. The Apostle John warns us.

Beloved, believe not every spirit, but try the spirits whether they are of God: because many false prophets are gone out into the world.

Be wise; Satan seeks whom it might devour, and its main line of attack is the mind. God gave us the human mind, so we look outward and upward toward Him. We DO NOT relinquish our minds to any external control under any circumstances. More on preserving the mind in the next chapter.

Since you read all the way to here… you liked it. Please use the Social Network links just below to share this information from The Explanation, Can Satan Influence and even Corrupt a Human Mind? Yes