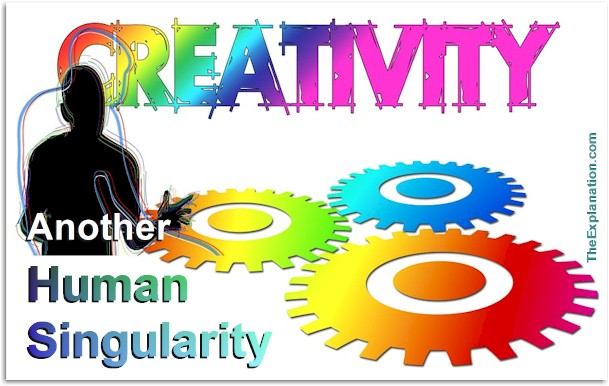 Humans alone possess creativity. It identifies humankind. It emanates from and is a quality of the human mind. Where did we get it?

Creativity is another human singularity. Only humans manifest this very complex characteristic. How do you explain that?

Let’s remember why we are discussing creativity: It’s in the context of what makes humankind human. Last week we said humankind manages space-time. Creativity is one of the ways we make something over a period of time.
(Audit of Humankind, chapter 1.3)

I just happened on the Smithsonian Institution website: HumanOrigins and read this: Human Characteristics: What Does it Mean to be Human: Walking Upright, Tools & Food, Bodies, Brains, Social Life, Language & Symbols, Humans Change the World. Many would argue that most of those traits describe animals as well. Is that all there is to it, or are we missing something much more important?

In the previous chapter of this book Audit of the Universe, I stated that the human mind is the key identifier of humankind and all their cognitive abilities emanate solely from that entity. No mind, no creativity! Why doesn’t the Smithsonian Institution and the cognitive sciences designate creativity–and several other singular traits we’ll discuss–as unique to humankind?

The human mind is the key identifier of humankind, and all their cognitive abilities emanate solely from that entity. No mind, no creativity! Your mind gives you creativity, and that is a human singularity. Click To Tweet

Every one of us can remember a personal creativity moment. The earliest memory I have of ‘creating’ is when I was playing with my sister. We had two single beds separated by a little aisle. We pretended that it was the interior of a plane with passengers sitting on each side. We were the steward and stewardess serving fried eggs which were round pieces of white cardboard with a yellow yolk painted in the middle. No plates needed! Who eats fried eggs in a plane? That doesn’t matter does it–when it comes to creativity?

Racecar created from a soda can

I remember seeing pictures of kids in a slum who were racing soda-can-cars around a heap of garbage. The reality is we give our kids too much stuff rather than encouraging them to use their creative capacities to make their own experiences.

You can create something out of most junk or scrap. An entrepreneur in my home town just opened a resourcerie–a place for upcycling–where you can take any junk you want to discard. They received 200 tons last year and recuperated 95% of it. They turn old audio cassettes into lamps and a washing machine’s circular tub into a coffee table. That’s creativity. As the saying goes, one person’s junk is another person’s treasure.

I’m continually amazed at how people create amazing things from everyday objects and even junk.

As a youngster living in Johannesburg one day, I got my hands on this big wooden crate, about the height of a table. I took the top off and nailed it to the back and voila, I had a workbench. With some big nails in the right places, I could hang my tools on the backboard. Was I ever proud of my creation! Now I can create a mock-up of this same workbench using some graphics program on my computer. Creativity never stops.

Just saw this website where this family creativity constructs some fantastic items from wood pallets. You’ll find tables, shelves, doors, walls, flower boxes, furniture, and barbecues that are dirt-cheap if not free.

At the age of about eight, I got the idea for my first business when I went to the hairdresser. They needed magazines regularly. I created cardboard covers with a couple of holes in the spine, threaded some colored twine, and tied a cute bow. Then inserted an opened-magazines people were discarding. Five to twenty magazines per hairdresser or beauty salon revolved around each month, and I was in business. Eight-year-old kids have tremendous creativity– help them channel it properly.

Today I live near Paris, and every ten, or so, years we have snow. I have a small driveway and, as you know, when you walk on snow, it compacts and freezes becoming slippery and dangerous. When I lived in Montreal where snow is frequent snow-shovels are in every corner store. Try to find one in Paris or its suburbs! Even a shovel with a straight leading edge is hard to come by.

So, I decided to make one, and it’s actually effortless–and very useful.

All you need are a broom, a piece of metal, or wood, and some wire. I had all the necessary around the house. A few holes and some wire-twisting and it’s done. I did a McGyver, and you can see the result. My driveway and sidewalk thanked me. And I can still use the broom and put it together in another ten years when we have snow again. 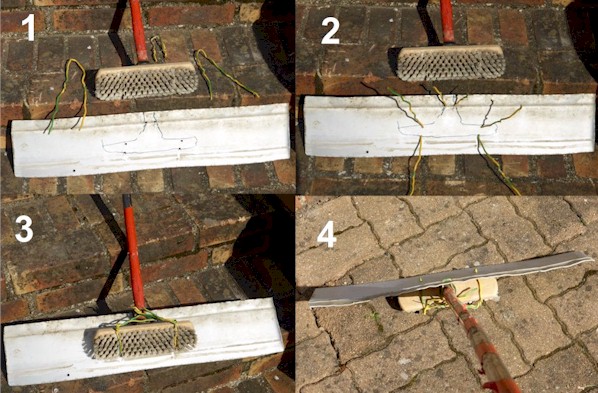 Today, DIY is the name of the game. There are hundreds of Youtube videos of how to use vinegar, banana peels, and so many other throw-aways we consider useless. I just cleaned my shoes with banana peels and learned I could use them to soothe mosquito bites, to which I’m prone.

Creativity is a vast subject that has been treated by many. Here’s a series of 7 TED talks on creating. Each of these speakers offers gems of information about creativity related to humans. However, none answers the fundamental question: Why is each human creative? Why is creativity a human singularity? The Explanation will answer this question in the upcoming book, already in the writing process: Origin of the Universe.

There are shelves of books offering gems of information about creativity related to humans. However, none answers the fundamental question: Why is each human creative? Why is creativity a human singularity? Click To Tweet

In the meantime, realizing that creativity is a SINGULAR characteristic of humankind is maybe, most likely, a concept that you have not considered, The Smithsonian hasn’t. You need to add this piece of the puzzle to the other parts because otherwise, you’ll not be able to assemble the entire puzzle of humankind accurately. We will add many other different pieces. Pieces that might be hard to digest but when you see them, hopefully, they’ll become part of your common sense.

I’m going to conclude this blog post with references to a couple of the creativity videos in the above playlist.

She uses the example of the poet Ruth Stone who could hear a poem coming at her from over the landscape and would run into the house to grab pen and paper to write it down. She then refers to this creativity being given to people via daemons and genius, referring to Greek mythology. These were believed to be forces outside of humans yet capable of influencing them.

I’ll limit this blog to the subject of creativity, but I want to draw your attention to this related subject.

In the previous chapter, I pointed out that the human ‘mind’ is an entity that is not part of the brain. You cannot measure the mind with some physical instrument. It’s an immaterial part of humans. Many balk at this concept and consider the mind a material part of the brain. Well, Elizabeth Gilbert has had discussions with Ruth Stone and others, including herself, who have experienced outside forces inspiring their creativity. We shall discuss these ‘outside forces’ later.

But the historical recapitulation of the meaning of the word ‘genius’ is very revealing and worth a listen. It shows how ‘rational humanism’ has taken over much of the ‘intellectual thinking’ of the Western world. That’s why I had to write Inventory and Audit of the Universe. People today, immersed in post-truth social media, have been removed from the basics of knowledge. They have difficulty defining the root pieces of the puzzle. And you can’t get a decent picture without all the pixels in their rightful place.

Rational humanism has taken over much of the 'intellectual thinking' of the Western world; this coupled with being immersed in post-truth social media, has removed people from the basics of knowledge. Click To Tweet

You can listen to them; here they are:

I point them out because these, and many other types of experiences, are singular to humankind. They could be called the results of creativity. Consider such experiences as unique to humanity but especially how the mind interprets such episodes leading to changes in our neurons and especially in our lives. Humankind is much much more singular that walking upright even begins to suggest.

Creativity is unique to humankind. Human minds interpret this and other experiences leading to changes in our neurons and especially in our lives. Humankind is much much more singular that 'walking upright' even begins to suggest. Click To Tweet

She closes by talking about everyone, “creativity is essential to all of us.” Yes, it is part of our ‘work,’ as Burstein says. Creativity is part of each human being regardless of nationality, intelligence, creed, or whatever other groups into which you want to sub-divide humankind. We’re all one people, and we all possess creativity. Something to ponder about when it comes to singularity. And you might throw in a little pondering as to why the Smithsonian Institution and cognitive scientists don’t add this unique characteristic as an identifier of what’s human.

This blog post is an excerpt from chapter 1.4 of the book Audit of Humankind.

Since you read all the way to here… you liked it. Please use the Social Network links just below to share this information from The Explanation, Creativity Sets Humankind Apart from and Above All Other Life on Earth