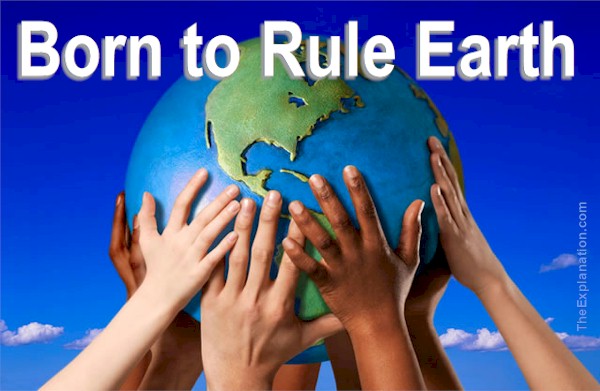 To Rule Earth, that’s the calling of all human beings. A lofty purpose that God has set for each one of us.

Born to Rule Earth. Each human being is here to learn to rule the world. That is a lofty purpose.

To rule Earth is the reason you are here. After creating humans, God’s very first directive was for them to dominate and reign over planet Earth. Why is rulership so important to God, and why it should be to you too?
(Origin of Humankind, chapter 1.8)

We’ve seen that God created humans, both male and female, two complementary genders for procreating. But God’s priority of priorities for humankind is rulership. What a purpose, what an unheard-of story.

The first item on God’s agenda for His ultimate sixth-day creation of human beings was for them to rule Earth. He states it in no uncertain terms.

26 And God said, Let us make man in our image, after our likeness: and let them have dominion (7287) over the fish of the sea, and over the fowl of the air, and over the cattle, and over all the earth, and over every creeping thing that creepeth upon the earth.

28 And God blessed them, and God said unto them, Be fruitful, and multiply, and replenish the earth, and subdue it (3533): and have dominion (7287) over the fish of the sea, and over the fowl of the air, and over every living thing that moves upon the earth.

If there’s one point here that we should capture in verse 26, it is “… let them have dominion … over all the earth.” You don’t have to interpret that to understand its meaning: He created humans to RULE EARTH. Quite a program. An incredible goal, as well as a massive challenge for humankind. God demanded us to rule over every living creature on the planet and the planet itself.

You could be asking yourself the question, why haven’t I heard about this rulership before? Most people think their goal is to go to heaven, Valhalla, paradise, or nirvana. No, you were born to rule Earth, that’s what the Bible says. It’s not only now, during your lifetime but also for the future as we’ll see in a minute.

There’s an additional realization from this injunction to rule Earth and all its beings. And that is, to rule Earth, humankind had to be equipped physically and mentally to be able to accomplish this task. Indeed humans are so endowed, right from their creation. The seven keys to How Humans Function based on their minds gives us the mental potential to do this. Humankind also possesses all the Singularities like imagination, manage time and space, creativity, meeting challenges, etc. to rise to their endeavor to rule Earth.

I’ve expounded these characteristics extensively in Audit of the Universe, where one goal was to turn all the puzzle pieces right side up. Now, we’re assembling the puzzle. Now you can see why the Human Functions and Human Singularities are needed and how they fit together so well to accomplish the task set forth by God the Creator: to rule Earth. The final and critical singularity of humankind is to govern and rule their environment on an individual and collective level.

Here’s the meaning of the Biblical Hebrew for dominion.

רָדָה râdâh raw-daw’; a primitive root; to tread down, i.e. subjugate; specifically, to crumble off:

At first sight, this dominion can look somewhat heavy-handed. Indeed, dominion can be wrongly wielded. The entire book Audit of the Universe relates how humans rule Earth and the outcome of their dominion. Here’s the fundamental question, is the glass of peace on Earth getting fuller or emptier? That’s simply another way of asking, is the rulership of Earth heading toward a more positive or more negative state? What רָדָה râdâh raw-daw is telling humanity is that we are supposed to use and be in control of everything on planet Earth. We can do it the right way, or we can do it the wrong way. We have free choice.

With that in mind, let’s look at a second word, in verse 26, used to express how to rule Earth, subdue. Here’s the Biblical Hebrew.

Notice how this subjugation can be both positive and negative; this corresponds to how humans can rule Earth. It also corresponds to the question about the glass getting fuller or emptier. Earthquakes, fires, floods, hurricanes slash countries around the world, and the Intergovernmental Panel on Climate Change released its report this October 2018 on the dire consequences of planetary temperature increase. Fracking is about to start in Britain, and the Noble Peace Prize is awarded to Dr. Denis Mukwege and Nadia Murad for fighting horrendous infliction of physical and mental injury on females, the list goes on. Yes, we should ask the question, how are humans doing as they rule Earth. We should be evaluating our individual and collective rulership.

Biblical Hebrew vocabulary expresses both positive and negative ideas. We can negatively disregard or positively conquer our Earth; that’s one of the Seven Keys to Master Biblical Hebrew. The very purpose God created humans to rule Earth has become a core planetary issue in 2018. If you don’t think the Bible is a contemporary work dealing with current problems, then maybe you need to reevaluate.

Humans possess the image and likeness of God.

We read in Psalm 47:7, ‘For God is the King of all the earth…’ Considering the state of Earth today, many people, even believers, wonder if God is still there. How can He be King and allow the Earth to be in its present state? The Explanation will answer that question a little later. In the meantime, God is King; He’s the Ruler of Earth. If I put it in colloquial terms, God’s profession is that of being a ruler.

I’ve spent quite a bit of time showing you how the Bible indicates humans were created in the image and likeness of God. That similarity with God includes our capacity to rule. We spend a lot of time administrating, regulating, managing, call it what you want, it is ruling over our environment.

I realize this human rulership as a likeness to God’s rulership is a new concept for many. That’s why there’s the need to see this piece about the human singularity of rulership as we did in Audit of the Universe. Now, we can assemble these puzzle pieces correctly in Origin of the Universe; this is one of the very first pieces to do with humankind. We’ve just learned a key reason each person is here on Earth, to learn to RULE EARTH, the portion of Earth over which each of us has dominion.

The Bible confirms this concept of human rulership in Psalms 8:6, ‘You [God] made him [humanity] to have dominion over the works of your hands; thou have put all things under his feet.’ Many other contexts repeat the injunction of God for us: rule Earth.

The Future of All Human Being is to Rule Earth

8 And when he had taken the book, the four beasts and four and twenty elders fell down before the Lamb [Christ], having every one of them harps, and golden vials full of odours, which are the prayers of saints.

9 And they sung a new song, saying, You are worthy to take the book, and to open the seals thereof: for you were slain, and have redeemed us to God by your blood out of every kindred, and tongue, and people, and nation;

10 And have made us unto our God kings and priests: and we shall reign on the earth.

Genesis 1.26 said, let us make man in our image. I pointed out that man means all of humanity, men and women of all nations. Well, Revelations 5.9 if the confirmation of this, every kindred, and tongue, and people, and nation.

Pay attention to where we are going to rule: on the earth, that’s what your Bible says. All humans are equal, in that we are all here now to prepare for future rulership roles on Earth. It’s an exciting story, and The Explanation will show you what the Bible says about how to rule Earth now and how that will impact our rulership in the future.

Go to UnlockBibleMeaning.com and search for dominion. Then switch to Strong’s and see their meaning. You can also click below each reference on Hebrew Concordance to find each instance of the Hebrew word in the scriptures. Doing this will corroborate both the fact that God is the ultimate Ruler and humanity’s role as rulers.
Specifically, notice 3 points.

This last point has vast implications. God created Earth with everything in it so we could rule it. If you know the so-called Lord’s prayer, this should be no surprise to you although it will be because nobody explains that ‘let it be done on Earth as it is in Heaven,’ has to do with ‘let rule and government on Earth be as it is in Heaven.’

There’s plenty to study and meditate on here.
This blog post is an excerpt from chapter 1.8 of the book Origin of Humankind.

Since you read all the way to here… you liked it. Please use the Social Network links just below to share this information from The Explanation, Rule Earth – To Rule the World is God’s Purpose for Humans