Human Reasoning has No Explanation for the Mind. Dreadful 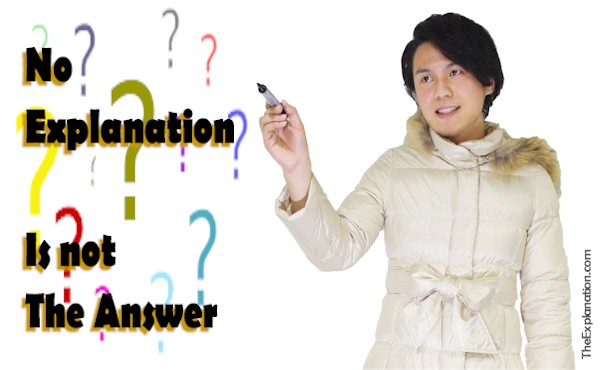 No Explanation from science, philosophy, or religion puts the mind-body problem to rest. Where do we turn for the solution?

Human reasoning has and is searching high and low, and still, no explanation for consciousness and mind is forthcoming. Not even close. We won’t even wonder about the no explanation of why the mind even exists.

Stardust is the composition of our body. Imagine that. Where did the original stardust come from? No explanation. What about the origin of the fine-tuning for that stardust to become a life-supporting planet called Earth? No explanation. Then the inert minerals transformed into life. Wow, no explanation. And then, the biggest leap in history; living matter developed ethereal consciousness and mind. No explanation.

That’s an awful lot of no explanation from enlightened scientific, philosophical, and religious reasoning of 21st-century progressive humanity. Thankfully, we can count on science to explain material matters, just as we can look to behavioral science to describe human experiences. But, no explanation is prevalent and, I wrote in Part 5 of Audit of Humankind: How Humans Reason about this cacophonic collapse of communication and the presence of ironic science.

When it comes to profound, coherent explanations of the mind-body problem, we’re going to have to search for another source.

The approach involves NONE of the methods above, no philosophy, no science, and no religion.

The basis for further discussion is Theology; this is one field we have not discussed yet.

Some might think this is akin to religion, but there’s a night-and-day difference between the two. So, let’s, hopefully with an open mind, explore this alternate option.

The first point to be made is a clarification of the term. Simply because we might incorporate or confound theology with religion; these are two different babies.

Let’s look at the word theology, with its two distinct parts: theo and logy.

Right away, we run into a thorny issue: the existence, or not, of some higher power. Then, if we agree, there is one: the nature of this higher power. If we took a poll, we’d get every idea under the sun—and then some. A factor of belief comes, assuredly, into play—and this is a very personal feeling that characterizes each one of us. As the author of this book, I want to respect your beliefs about G/god, science, religion, or any other concept or lack thereof.

However, we have taken a step in the direction of some higher power when we decided that none of the key ways humankind reasons (philosophy, science, religion) is fully working.

Theology means we continue in the direction of a higher power, fully aware that we don’t know if this G/god even exists and that this power has yet to be defined.

The meaning of logy  is

Logy has to do with the study of, or language and discourse around a particular subject. Here: god(s) or God.

We find a related word as part of logy: logo

A sign or character representing a word or phrase, such as those used in shorthand and some ancient writing systems.

As you can see, this word relates to a sign, character, word, phrase, shorthand, and writing systems. All of this is part of the study of language and discourse, as we saw above. We see company logos everywhere–one identifying sign, frequently without even a word–and we know what or who it refers to precisely.

Theology is the sign or set of symbols, characters, words, phrases, in short, the writing system that identifies and expounds god(s) or God.

The Explanation is going a step further here because, within this concept of logy and logo, we find a familiar English word: logic.

Middle English logik, from Anglo-French, from Latin logica, from Greek logikē, from feminine of logikos of reason, from logos reason (Merriam-Webster definition). Merriam goes on to add this:

1. A proper or reasonable way of thinking about something: sound reasoning “There’s no logic in what you said.”

2. A science that deals with the rules and processes used in sound thinking and reasoning.

When we consider these concepts, we define theology as the study of words related to God. not just any words, but rather sound, reasoned, logical words.

The Explanation is NOT humankind’s words about a deity. That’s what Wikipedia and the Science of Theology do.

The Explanation IS about the sound, reasoned words of God.
What does God have to say? What is His reasoning?
Why does He want Peace and Prosperity?
It’s only the Source that can give real reliable answers.

Theology, as seen by The Explanation, refers to the words of the source. The source is a god with a small or capital g. Since it’s generally associated with religion and its originator, it comes with a capital G. I don’t expect non-believers to accept the capital G or even to believe that God has or could transmit the answers to the fundamental questions of life.

What The Explanation suggests is: You’ve listened to all the no explanations humankind has to offer about d/Deity as well as consciousness and mind; why not give an ear to what Deity has to declare to humanity? We’re embarking on a fabulous story, some would say fabulation, about a Spiritual God and a Physical Universe, Earth, and humankind.

Is there Divine logic, sound reasonable words to explain not just the visible, but the invisible? A complete explanation of the brain, consciousness, mind, humankind, Earth, and the Universe? Not only the what, and how, but especially the why. That’s a tall order.

You’ve heard of the Grand Unifying Theory (GUT) and the Theory of Everything (TOE). They unify all the known physical forces governing our universe into one simple mathematical equation. Watch this informative video by Dr. Don Lincoln from the Fermilab, the US national laboratory specializing in high-energy particle physics to see the details and realize we aren’t close to finding that answer.

The goal of The Explanation is obviously not on that scientific level but on a universal humankind mental and spiritual level. For the time being, I’ll equate the spiritual level to the psychic or mental and leave open the possibility that there might be other levels that are not readily visible to humankind.

This GUT, as scientists refer to it, (Inventory of the Universe, chapter 1) or Coherent Completeness, as I’m going to call it, is a unique concept.

Coherent Completeness is the all-englobing-everything. Here are a few made-up words to try and describe this idea. It’s monotheology, monoview, monomind, monotruth. Coherent completeness unifies, into one complete puzzle, a cohesive view of all the visible and invisible pieces. It renders a clear image of the why, how, and what of the Universe and humankind.

The religious-minded population, who believes in a Higher Power, often points out: The author—God—is mysterious, He’s not a man. How can you expect to understand the mind of God? Or, another argument, humans are just supposed to do our best and leave the rest to Him. He knows our hearts and will do what He has to do. And 1001 other reasonings that drive us away from even thinking we can sound the mind of God.

Well, that is the task The Explanation has set before itself. To show how to reach and teach Coherent Completeness. Now, back to a deeper definition of theology:

Theology understands the mind and concepts of The Originator. It is the all-encompassing WHY as the foundational motivation of the source compared to the What and How of religion.

Theology goes deep into the mind and purpose of the author and answers the Why questions.

Whenever the Author thinks, says, or does something—there’s a reason. He does nothing haphazardly. There is motivation, rationale, and an explanation behind each move.

In conclusion, to this short section on Theology, expanded in Origin of the Universe, I’d like to tell you about a dilemma I had when the idea of writing these books first germinated. What was I going to name it? Initially, it was to be one book, not a series. And the second question, as the author, how should I present my name? Maybe even use a pseudonym. As you can see, I decided against the latter simply because the teaching and videos that accompany the books would reveal my identity, anyway.

I’m just as human as any person, be they a leader, philosopher, scientist, or religionist. My ideas are just as bad as anyone else’s on this humongous subject of coherent completeness.

So, what’s my relationship with this plan? I wanted the title of this book series to reflect that clearly: The Explanation with Sam Kneller. It looks like a minor detail—with—but it’s not. Most titles would state “A Book Title BY …” with the name of the author. I’m explicitly avoiding the by to clearly show that I’m NOT the author of The Explanation as such. All I’m doing is expressing The Explanation in different terms. I’m exposing it in a new light to make it available to a broader audience; this is The Explanation WITH Sam Kneller. I’m just along for its exposition.

I am in ABSOLUTELY NO WAY, the author of the plan of coherent completeness. I’m a dummy when it comes to that. Your appreciation of or argumentation with the program of coherent completeness is not an issue to take up with Sam Kneller. That’s why I will not debate, quarrel, or squabble about this plan. I will try to explain, but, if you have a problem with it, then you need to take it up with the real Author—and I repeat, that’s not me.

As I stated in Chapter 1, Higher Power or Not? I wrote three books, Inventory of the Universe, Audit of the Universe, Audit of Humankind, and the first chapters of Origin of the Universe, summarized at the beginning of this book, Mind-Body Problem Solved, as an introduction to understanding The Explanation, and why we must delve into theology. We’re almost there. But, if we wish to explore the divine, we first have to determine where these sound, reasoned words, related to god(s)/God are located.

Since you read all the way to here… you liked it. Please use the Social Network links just below to share this information from The Explanation, Human Reasoning has No Explanation for the Mind. Dreadful