Brain to Mind. Can the Material Create the Immaterial? 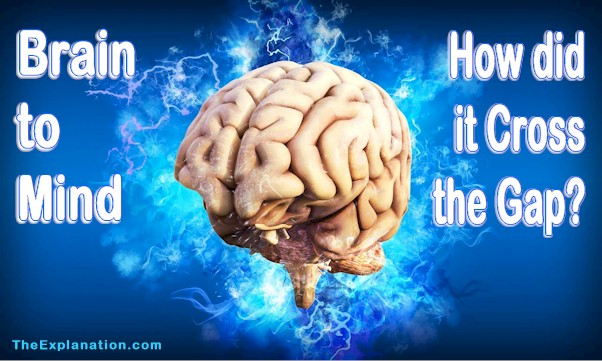 Everyone agrees there is a brain and mind. The disagreement arises in whether and how humans crossed the gap from brain to mind.

Let’s recap. We’re discussing the mind-body problem. To find a solution, we can depart from the non-existence or the existence of a Higher Power. Here we’ve started our trip with the former concept. So far, I’ve evoked two scenarios Science faces and still must resolve. First, a fine-tuned universe, how? Why? Second, the transition from geochemical rocks to biochemical cells, how? Why? This episode marks another milestone in human development. From brain to mind, how? Why?

These last two episodes included many quotes. The reason is, I’m no expert in the fields of astrophysics or chemistry. And I want you to hear it from the horse’s mouth. This is eyewitness evidence from practicing experts in these disciplines. Likewise, in this expose of brain to mind. Let’s start with a short video reminding us of the complexity of the brain. Pick up on some of the overriding statements.

4:00 “On their own neurons aren’t very bright but put 100 billion of them together in a small space and let them all start talking to each other (each communicates with up the 50.000 other neurons) and you get brainstorms. It’s this complexity that allows us to think imaginatively. The trillions of neuronal networks, like an improvisational orchestra, create new ideas and connect different thoughts in a whimsical and sometimes inspired fashion. It’s this impromptu ability to produce new things in our brain that allows us to progress.”

The brain is truly amazing, so much so that I hope you meditate on and analyze the idea that all this happened by natural selection over a rather short period of time from an evolutionary point of view.

The New Scientist writes “We can only speculate about why their brains began to grow bigger around 2.5 million years ago, but it is possible that serendipity played a part. In other primates, the “bite” muscle exerts a strong force across the whole of the skull, constraining its growth. In our forebears, this muscle was weakened by a single mutation, perhaps opening the way for the skull to expand. This mutation occurred around the same time as the first hominids with weaker jaws and bigger skulls and brains appeared (Nature, vol 428, p 415).”

Remember to always note concepts like speculate or words like perhaps. The shots in the dark having no solid basis. This is ironic science. Here’s another quote from the book Brain to Mind by James Zull. Please take a few moments to reflect.

My hope is to identify and explain how a brain becomes a mind through experience, and to create an educational agenda that will encourage and support that goal. Technology must serve development of the mind, not the reverse.

The focus… on processes that are central to mental growth at any stage in life… we can claim success if learners… proceed to take actions, and ask questions when given a task. This is in contrast to getting it right.

There are two aspects here. Let me take the second paragraph first.

Saying a brain becomes a mind through experience makes it sound like the brain is the originator of the mind, is it? Critical thinking, please. This is the heart of the brain to mind issue. Can a physical organ,  even as sophisticated as the brain engender the metaphysical output of reasoning, creating, and the many wonders the human mind is capable of?

Are Brain and Mind the same thing?

In this video Robert Kuhn, in his quest to get closer to the truth interviews brain scientist David Eagleman (this is a must-watch to understand the brain-mind problem) and Medical Professor Robert Stickgold “we don’t know how matter gives rise to mind.” A very eye-opening 27 minutes well spent.

Here’s the fundamental question. Can science explain the human mind?

People don’t seem to regard the complexity of a natural phenomenon as a critical barrier to scientific progress. Instead, those phenomena that involve the unique characteristics of the reflective mind — such as introspection and conscious will — are the ones that are taken to present a real obstacle for science. And those that contribute to making us exceptional — more than a “mere” animal among many — seem to place us further beyond what science can explain.

There are many articles wondering if science can resolve the problem of how the brain generated the human mind. The above and below quotes come from NPR, the National Public Radio, an American privately and publicly funded non-profit media organization.

The passage from the physics of the brain to the corresponding facts of consciousness is unthinkable. Granted that a definite thought, and a definite molecular action in the brain occur simultaneously, we do not possess the intellectual organ nor, apparently, any rudiment of the organ, which would enable us to pass by a process of reasoning from the one phenomenon to the other.

They appear together and we don’t know why. Were our minds and senses so expanded, strengthened and illuminated as to enable us to see and feel the very molecules of the brain, were we capable of following all their motions, all their groupings, all their electric discharges, if such there be, and were we intimately acquainted with the corresponding states of thought and feeling, we should be as far as ever from the solution of the problem. How are these physical processes connected with the facts of consciousness? The chasm between the two classes of phenomena would still remain intellectually impassable.

The Hard Problem of Consciousness

Here’s a comment from the Internet Encyclopedia of Psychology.

But even after we have explained the functional, dynamical, and structural properties of the conscious mind, we can still meaningfully ask, Why is it conscious? This suggests that an explanation of consciousness will have to go beyond the usual methods of science. Consciousness therefore presents a hard problem for science, or perhaps it marks the limits of what science can explain.

I could continue forever giving you such quotes. I hope your critical thinking is running smoothly. So what do people think explains the human mind, if not science?

Explaining how the mind works: A new theory (Another one)

The desire to understand the greatest enigma of all – our own minds – has been the driving force behind many scientific endeavours, leading to the development of theories and experiments aimed at explaining the mechanics of being human. Human thoughts, feelings, and behaviours are rooted in the brain, where a complex network of cells receives information from the internal and external environment, transforming this information into our experience of ourselves, the world around us, and our relationships with it. It goes without saying that how this happens is still being explored.

If you want to continue your study of science and its research about the brain to mind question, do a Google search for how does science explain the human mind.

I will suggest you read the chapters relating brain to mind in both Inventory of the Universe and Audit of the Universe. These books are available for purchase, but the point here is this material enhances your understanding of the body to mind issue. It is vital information related to the secular approach to the working of the brain and mind. But, there’s no space in this book, Mind-Body Problem Solved to include all the relevant knowledge. The subject is simply too vast. Frankly, the goal of Part 1 of this book is to demonstrate that science and philosophy cannot humanly answer our questions.

Here are links to the chapters in the two books.

Inventory of the Universe

Audit of the Universe

This is the last episode about science and philosophy directly related to the brain to mind issue. We must broach one pressing subject in the next episode. Do animal intelligence and human mind have anything in common? Could the former give rise to the latter? That’s the next episode.

Since you read all the way to here… you liked it. Please use the Social Network links just below to share this information from The Explanation, Brain to Mind. Can the Material Create the Immaterial?