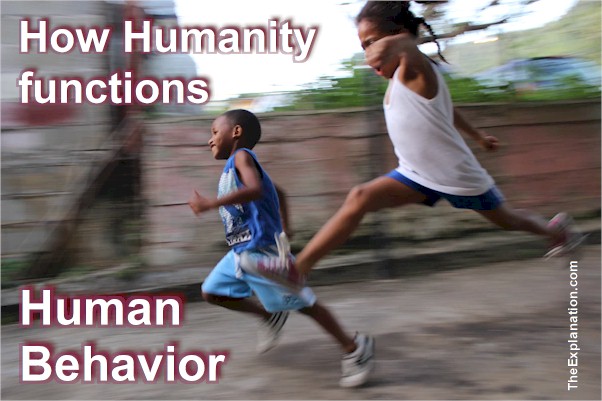 Spotlight on human psychology. The deep-down inner workings of you and me. What causes human beings to act the way they do? What makes us tick?

Human Psychology — what makes humanity tick? Can we harmonize the ticking?

Human psychology or the interaction of attitudes, emotions, sentiments, and moods. What can be an explosive mixture—within each one of us? A comment, an action from someone or something, can light our wick and make us react instantaneously.
(Audit of Humankind, chapter 2.1)

These next two posts will transition you into how human psychology functions. Why humans behave the way they do. We’re going to see the mechanisms, the workings of the human mind that gives rise to human behavior.

I feel a need to open up to you and explain one of the basic points I wanted to keep in mind from the very beginning of this project: There are certain subjects that I did not want to broach simply because they are too polarized. One of the main ones is Darwin and other concepts of evolution. This is the first time I’m using this word.

In my mind, the problem with this type of subject is that people are so fixed in their stance that they have blinkers on and cannot see the bigger picture beyond evolution… or creation. Once this Pandora’s box is opened it becomes a punching match of arguments against arguments—and everyone ends up losers.

Worse yet, our emotions are so on edge that we can’t go on to discuss the bigger picture of which evolution and behavioral and cultural evolution are only pieces. We are so blinded by these arguments that we can’t or don’t want to rise above them to perceive what’s beyond the horizon. Inventory and Audit are designed to focus on the big picture first—before we get into the details and see how it all interlocks together.

As I begin to get into details discussing ‘humankind’ let’s clarify certain points.

We’re not going to discuss ‘what’ human is. I did point out some major differences of humans in comparison to animals in Inventory chapter 10. I did this to open our minds to facts. But, as far as I’m concerned, it doesn’t even really matter ‘what’ humans are, whether they’re an evolved animal or some other totally different species. Cognitive science and evolutionary behavior are focusing on the differences—or rather, the similarities—between animals and humans. Their efforts are indeed commendable and as I’ve stated on numerous occasions, that both animals and humans have a lot in common, physically (bodily function, life, death…), psychologically (emotions, suffering…) and mentally (communication, tools, decision-making…). All of that is valid.

In fact, we even talk about the ‘animality’ of humankind, in reference to our more basic and sometimes wilder instincts. We attribute these characteristics to the amygdalae part of what we even call our reptilian brain, the stem part leading up from the vertebral column.

However, I believe it is a given that we realize that humankind has vastly more advanced capacities than animals. Those human cognitive capabilities allow us to do infinitely more than the most intelligent animals as I pointed out in Inventory chapter 10. This is where the mind comes into play and I’ve discussed that at length in chapter 9 of Inventory and Audit. Some might agree or disagree with my belief of the mind being exterior to the brain. But that’s not the point here, because we all agree that, for whatever reason, human mental capacities, human psychology,  are far beyond those of any animal.

What I am saying is that human psychology FUNCTIONS totally differently than animals. When we talk about human nature, we know which species we are referring to and furthermore; we know that animals to not possess human nature. Animals possess animal nature.

Knowing what humans are can be helpful and I go into this in great detail in Origin of the Universe, the next book, after further development of this big picture.

But what is even more important is understanding human psychology. Beyond that, we can ask WHY humans function this way… and I will answer that question in Origin of the Universe, but let’s talk about how mankind functions for now. This chapter 11 is devoted to that subject.

Human psychology — Get out the instruction manual

If you’re in front of a printing press which has come to a grinding halt, you know it’s a printing press—just like you know a man, woman, and child are humans—you get out the instruction manual to see how it should function and start looking at the causes for its malfunctioning.

Humans have not only their singularity as compared to animals as we saw in Inventory chapter 10 but they also have both their bright and dark sides—their double-nature—as we saw in the previous chapter.

Likewise, with humans and human psychology, we don’t need to know if they’re animals or not, nor if they’re the result of evolution or creation, nor if they’ve been around for six thousand years or millions of years. Getting into arguments about such subjects only clouds the issue of ‘how do we get humankind to function in order to have more peace and prosperity.’

There are so many case studies, not to say experiments on human psychology with so many more going on continuously that we have enough data to know how humankind functions. And that’s what this chapter is all about so let’s get on with it.

Now we have to ask ourselves, what makes humans tick?

Each person—even within the same family and with twins—has their own specific talents, inclinations, likes and dislikes in all their five senses and especially in their bodies, brains, and minds. The combination of all these variables makes us 7 billion individuals. Thankfully, we’re not all alike! Each of those 7 billion human psychology people functions independently and differently. But those differences—unlike animals—present real dilemmas.

The Explanation is about bringing concord not to twelve or even one million autonomous personalities, but to the entire group. Notice what I said, I didn’t say the goal is billions of identical clones or cookie-cutters. Rather each one maintaining their traits, their personality, their talents, their individuality but… all co-habiting—regardless of race, creed, background—in harmony. That’s the challenge.

Each of us has our own personal conflicts. Just living our own lives, human psychology, is challenging enough. Men and women have their particular outlooks, as we’ll see in the next chapter, making living in couples sometimes a difficult operation. How then can we expect to have families, neighborhoods, cities, states and nations … functioning with peace and prosperity?

“This is complicated stuff,” exclaims Galacti.

This blog post is an excerpt from chapter 2.1 of the book Audit of Humankind.

Since you read all the way to here… you liked it. Please use the Social Network links just below to share this information from The Explanation, Focus on Human Psychology. How Humans Function, Incredible