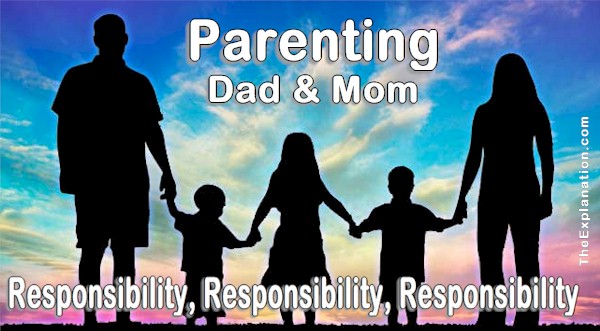 Parenting follows on from bride and groom, husband and wife. Father and mother have benefits and many responsibilities.

Parenting, father and mother in a marriage have benefits and many responsibilities.

Parenting comes along when you’re husband and wife in a marriage. There are many benefits but there are also many challenges and responsibilities. Conceiving takes but a few seconds the rewards, consequences, and parental responsibilities can last 20 years.
(Audit of Humankind, chapter 3.8)

We’re discussing the structure of human society, the relationship between human beings, locally and internationally. We’ve discussed the equality of human beings and that humanity is composed of two compatible genders. The basis is that the only way to procreate is for two individuals, one of each gender, to come together. Last week we discussed the formation of such couples. Dating, engagement, courtship, bride, and groom. This leads to marriage and husband and wife with its beneficial effects. The family, cornerstone of human society is thus established.

If you’ve come across this blog post for the first time then please know that it is part of a larger work – Audit of the Universe. To see the entire context, which you can read online, click here.
We’ve reached an interesting, crucial and significant point in Audit of the Universe. We’re discussing major controversial issues of society. The goal is to clarify each of these puzzle pieces.
I’m asserting certain values. Why these assertions? What are they based on? The answers are found in the next book Origin of the Universe which you can read online here.

Parenting has become a hot subject because of the state of our children and youth. Unfortunately, many parents have no or very little preparation for this enormous and encompassing task. The access to mixed (more liberal or more conservative) child-rearing information only adds to the confusion. Another chapter or even a book would be necessary to delve into such details. I want to focus on two key issues.

The husband-wife example for the siblings is one of the key educational tools. Children learn by example, much more than we realize. They need to see the proper interaction between their father and mother, how each treats the other. This is the foundation of girl’s interaction with boys and later men. Likewise, boys interaction with girls and later women.

The appreciation and mutual respect between genders are impregnated and founded in a harmonious family. No other institution, not school, not Scouts, not army, not Church, not society, not any other authority can teach this. If children don’t grow up with and learn this in a loving home atmosphere they will be socially, gender-wisely and inter-relationally scarred and may be handicapped for life.

Parenting has many benefits but there are also plenty of challenges and responsibilities. Conceiving takes but a few seconds the rewards, consequences, and parental responsibilities can last 20 years and more. Click To Tweet

Marriage, the husband-wife, the male-female couple is not just some figurative sexual combination that we can debate and even discard. Evidence reveals that this age-old institution is the only human relational structure that assures proper upbringing of offspring and their insertion into a balanced and well-functioning society. Here’s a quote from The Importance of Fathers in the Healthy Development of Children which you can download here.

This bound and lasting twosome relationship is the only structure that assures not only the future generations through procreation but also their mental and social stability and well-being as a society.

Essential role of the father figure in child-rearing

Not a whole lot of attention has been paid to the father’s role. In France, and elsewhere, over the last generation, we’ve seen the rise of what is known as the papa-poule. The closest translation I have for this is a doting father. It is an excessive pampering father who might go so far as to take over the mother’s role towards their children. The upside of this is the emotional involvement with the child and the expression of male sentiments and attitudes. But there’s a downside.

Father’s shouldn’t have to play the role of the mother just as mothers shouldn’t be burdened with both their own role and, in addition, the fatherly model, which, of course, they cannot project–not being a father. Each gender has their specific role to assume, and that is already difficult enough in today’s society. Father’s presence is capital for the child’s development, from birth and all during the baby’s and the child’s development stages. Father brings the masculine influence so necessary for both girls and boys.

You MUST look at this video by Dr. Meg Meeker. As she puts it, Dads are the real game-changers for kids and the culture. They are the KEY to developing a child’s healthy self-esteem, in keeping kids in school and seeking higher education and in staying out of trouble.

Ninety-nine percent of young men that are involved in gangs are from father-absent homes. Why? Because a young man learns self-control from a dad. Just like a young man, a young boy learns respect, kindness, and gentleness from his mom. So, we are groaning under a generation of young men who have no self-control.

Here we see the complementarity of the two gender marriage and home. This quote talks about boys, but girls also need to learn these same characteristics. A family is a unit where everyone is learning from all the others. No training ground is perfect, that’s why it’s called a training ground. The family is continued-education for adults and children. Fathers and mothers learn the skills of parenting and children learn the skills of being decent, positive additions to the community.

We’ve experienced in this country (USA) over the last 40 or 50 years a tragic experiment and that’s an experiment with fatherlessness. The out of wedlock birth rate in the United States has moved from about six percent to something around thirty-five percent. In the African-American community, it’s moved from about twenty-five percent to something approaching seventy percent. And it’s a tragic experiment because we’ve learned that children do very badly without fathers both boys and girls need the influence of fathers as well as mothers. Mothers and fathers are both important and that’s why it’s important to have a healthy marriage culture.

This affirmation regarding failing marriage, failing husband-wife, failing father-mother twosomes is not just a USA phenomenon. It is specifically a Western modern culture occurrence. The more traditional cultured countries and areas of the world that have maintained their approach to the family have and are reaping the benefits.

Civilization will unravel if we do not do everything we can to strengthen the natural strength of a mother and a father as the core of child-rearing. They are really the future that they’re both the present and the future for our civilization both in terms of social benefits, social stability, as well as for psychological health.

Parenthood, fatherhood, motherhood face many challenges and shoulder many new and varied responsibilities. We all need to learn to grow into better families for the betterment of society.

Husband-wife, father-mother together are the foundation for successful parenting. Each is a step in a repetitive ballet of generations of human beings. It's an ever-present process for a solid worldwide human social structure. Click To Tweet

Here are some thoughts we’ve developed over the past few posts. This twosome union that is initiated by dating and courtship that leads to engagement and marriage of husband and wife. The twosome of male and female genders that leads to conception, birth, family, and the next generation. That twosome combination, father and mother that together, is the foundation for successful parenting.

Each is a step in a non-stop repetitive ballet of generation following generation of human beings. There is an ever-present identifiable step-by-step process for the establishment of a solid worldwide human social structure. Why is this so? Did this elaborate social structure just happen? Is there further meaning that we haven’t comprehended yet?

This blog post is an excerpt from chapter 3.8 of the book Audit of Humankind.

Since you read all the way to here… you liked it. Please use the Social Network links just below to share this information from The Explanation, Parenting, Father & Mother have Essential Complementary Roles