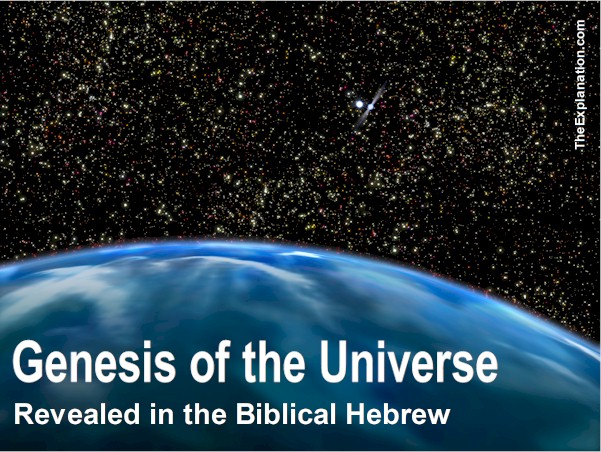 Genesis of the Universe – Imagine the uproar if science and Bible evidence harmonized. Well, real data reveals a match.

Genesis of the Universe. The meaning of the Biblical Hebrew vocabulary is more revealing than you know, and it points to Big Bang.

Genesis of the Universe has many components. We’re discovering the detailed aspects of the edge of each piece of the puzzle, just as you would with any puzzle piece. Let’s see its real shape and how it assembles with the other juxtaposing pieces; this is the only way to put the puzzle together.
(Origin of the Universe, chapter 6.4)

Over the last three blogs, we have seen that the Biblical Hebrew for ordained = fashion (blog 1), ordained = firm, stable (blog 2), garnish = royal pavilion and formed (blog 3) referring to how God’s finger worked in the formation of the Universe. If this is your first time at this blog, I suggest you review these previous blogs.

If you’ve come across this blog post for the first time, then please know that it is part of a larger work. To see the entire context, which you can read online, click here.
You can follow along by using the online Bible, the Interlinear Bible, Strong’s Concordance and the Hebrew/Greek Concordance at UnlockBibleMeaning.com
To understand how I’m using Biblical Hebrew, read this short presentation of 7 keys to Master Biblical Hebrew
To fully understand Big Bang and Genesis Creation please read this mini-series of blog posts starting at the beginning.
Galacti is our fictitious time-traveling, investigative, roving reporter who lends his insights and voice to the development of the narrative

Bible Reveals Aspects of the Formation of the Universe

Last week we studied Job 26:13 and how it expresses the concept of God’s Spirit garnishing the heavens with Job expanding on this concept by adding, ‘…his hand has formed (H2342) the crooked serpent.’

חוּל chûwl khool; or חִיל; a primitive root; properly, to twist or whirl (in a circular or spiral manner), i.e. (specifically) to dance, to writhe in pain (especially of parturition) or fear; figuratively, to wait, to pervert:

I suggested you do a study of Strong’s H2342. Look through the Bible verses that incorporate H2342 and see the usage of the various meanings. Taking the KJV translators’ nuances of chuwl, which I’ve emboldened above, here’s what EACH VARIANT TRANSLATION REVEALS about HOW God ‘formed.’ Each is an aspect of the genesis of the Universe:

Study Strong’s H2342. Look through the Bible verses that incorporate H2342 See how each variant translation reveals how God ‘formed’ the Universe. Each is an aspect of Genesis. Click To Tweet

First of all, God brings forth through travail, which is a French word meaning toil, exertion or labor: ‘Who has heard such a thing? Who has seen such things? Shall the earth be made to bring forth (2342) in one day? or shall a nation be born at once? for as soon as Zion travailed (2342), she brought forth her children’ (Isaiah 66:8).

There are an inevitable pain and anguish involved for the nations and Job; this is not a negative concept; even excellent and great beginnings go through a definite commotion and turbulence before they see the light. Galacti reads from another part of the Bible: “My heart is sore pained (2342) within me: and the terrors of death are fallen upon me” (Ps 55:4).

We now come to what I consider an astonishing description of the genesis of the Universe over a couple of thousand years ago.

“And the children of Benjamin did so, and took them wives, according to their number, of them that danced (2342), whom they caught…” (Judges 21:23). The genesis of the Universe is associated with dance. Our stage-spotlight highlights Strong’s clarifying resume, “to twist or whirl especially in a circular or spiral manner.”

Twist and whirl are the elucidation of the Biblical Hebrew word חוּל – dance.

Think of the polka, tango, jive, or modern hip-hop. Dancing is twisting and whirling. Put yourself in the place of the author and translators: how would you have summed up this process of the genesis of the Universe? Remember that it was only one hundred years ago—about 1910—that astronomers discovered the concept of spiraling galaxies receding from the Earth.

Two other translations of 2342 help us close this short expose. Waiting patiently and hope. None of us onstage is patient, since we want to know what the point of our action is.

When something is in the process of formation—being created— it inevitably involves waiting. A good quality to possess during this time-consuming undertaking is hope. For example, a husband has to wait patiently in the hope of good news as his wife gives birth to their first child. “Rest in the LORD, and wait patiently (2342) for him…” (Psa. 37:7). “It is good that a man should both hope (2342) and quietly wait for the salvation of the LORD” (Lam. 3:26).

All the above Bible verses, with their various translations of H2342, reveal the contours of this piece of the puzzle. It’s form and shape. As we begin to get a more global comprehension, this coherent completeness comes more into focus.

Put the fuller meaning of formed (2342) from Job 26.13 together. It incorporates the notions of travail with anguish and pain as the result takes shape while it twists and whirls in a circular manner, waiting patiently with hope that the outcome will meet the expectations.

Galacti thinks this is a mouthful—especially for a single Hebrew word! Nevertheless, he sees, as do we, that the creation of the universe involved all these planned steps and emotive attitudes.

We also understand that the genesis of the universe, according to Big Bang, takes on the scenario of whirling particles following circular motions spiraling out in ever-larger patterns patiently over time until, for example, we have our own Milky Way spiral galaxy. In other words, the Bible uses Hebrew words associated with the formation of the universe!

the Bible uses Hebrew words that are consistent with the vocabulary Science uses to describe Big Bang: Dancing in circular motions, spiraling out in ever-larger patterns patiently over time forming the universe Click To Tweet

To answer this, let’s view yet another related word to formed from the same Hebrew root 2342:

Notice that H2344 derives from H2342–our primitive root about formation; this is an additional descriptive element of formed: sand, as round or whirling particles. Note the concept of what sand is. In my mind, ‘whirling particles’ is also an incredible definition of molecules, atoms, protons, and even quarks. The Hebrew word formed encompasses specifically this meaning of ‘sand’ or round specks of matter.

Here’s another context revealing the quantitative magnitude of these particles: “As the host of heaven cannot be numbered, neither the sand (H2344) of the sea measured: so will I multiply the seed of David, my servant, and the Levites that minister unto me,” (Jer. 33:22).

We now have a majestic cosmos formed by whirling particles that is taking shape over some time.  Flashback to 10-6 seconds, or one-millionth of a second after Big Bang when elementary particles are flipping about and careening into each other like a roller derby. Leap to 30,000 years after the Big Bang when atomic nuclei form, but sand particle electrons won’t join the dance and bond with the nuclei.

As we run the video of the universe, electrons do bond with atomic nuclei and atoms form. Eventually, stars kindle into being with the heavy elements created in the whirling particle dance. Our own Sun develops, and the planets become solid, achieving their unique characteristics, in particular, the earth with its pluperfect conditions for supporting life. Before all of our present macrocosms can emerge, this cosmos begins with that whirling particle dance.

That’s the Biblical Hebrew story of ‘חוּל chûwl – Strong’s 2342‘–formed. Catch your breath, imagine, and meditate on that.

I reassure him that they are more important than he knows.

This blog post is an excerpt from chapter 6.4 of the book Origin of the Universe

I suggest you go over to UnlockBibleMeaning.com and look up all the verses in this blog post. Check them out and see for yourself that all the italicized words are related to the Biblical Hebrew root word חוּל chûwl – Strong’s 2342.

Look at some translations for 2342 that I did not use in this blog. Use Strong’s to locate them in the KJV. Read the verses and see how they tie in and add even more depth to the meaning of how God set in motion the genesis of the Universe.

Since you read all the way to here… you liked it. Please use the Social Network links just below to share this information from The Explanation, Genesis of the Universe – Science and Bible Evidence Match in its Formation