Male Gender – Its Significance and Why God Created it

The Male Gender is often decried today. Here’s what it represents from a Godly perspective.

The Male Gender. Do we need it? What is their purpose, if any? Why did God create them like they are?

To be a male in today’s society is not always easy. Berated for their aggressivity or lack of leadership, males do not always assume their responsibilities as they should. Men do, however, have an essential role to play in human society.
(Origin of Humankind, chapter 1.6)

Over the last few weeks, we’ve discussed humans created in the image and likeness of God, after His kind, Godkind. These Biblical contexts reveal that humans are all ONE race. Biblical Hebrew and the word adam are clear. It is not just the name of the first human being, adam is first and foremost a singular noun denoting all humanity, all people, all humans who are endowed with the image and likeness of God. We are ALL Godkind. We are ALL EQUAL.

Please keep that equality squarely in mind because now we have to talk about differences. Each of the 7 billion people who walk our planet is different. But what about the genders? When I confirm the equality of genders, can I also endorse the difference between genders?

Sorry for the grammar, but you need to see it with your own eyes. Here’s the interlinear version of these two verses. 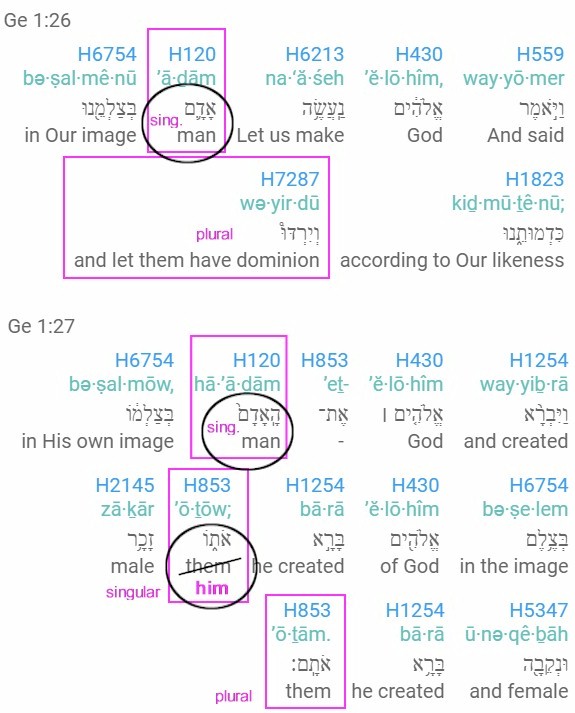 The Biblical Hebrew word adam is singular denoting ALL humanity. The plural in Genesis 1:26-27 means the two genders, male and female.

Even the translators of this Interlinear version took some liberty in the middle of verse 27. In the first part of verses 26-27, adam-man = humanity (singular). Grammatical gender agreement necessitates him in verse 27. In 2020 we’d say it to respect both gender and grammatically singular agreement, but since humanity refers to numerous people, we could say them, which is what the translators did.

God created humanity in His own image, in the image of God created He humans. All humans have the image of God. In that, we are all equal. Note that this is the first reference to humans, so their equality is vital in God’s eyes. Then verse 27 goes on to add, male and female created He them, clearly plural. Two distinct groups or genders, men and women, clearly differentiated by the plural them.

We’re going to define these two genders: male and female. Who are they? What does the Bible say? We read this in English and think we know what male and female are. Well, you’re in for a surprise.

Here’s the Biblical Hebrew for male:

זָכָר zâkâr zaw-kawr’; from H2142 (זָכַר); properly, remembered, i.e. a male (of man or animals, as being the most noteworthy sex):

I have to admit that when I saw Strong’s, the most noteworthy sex I figured I was in for a rough time explaining what this meant being a man myself, without losing my entire female readership! I meditated on this for a long time, months, before I realized what this is all about. One might decry Strong’s concordance for just such seemingly sexist remarks. Is such an outlook warranted?

Realize that Sam Kneller is not saying that the male gender is the most noteworthy sex. Strong says that based on the Biblical Hebrew in the Bible. Strong does not explain here as to why he said this. What we do know, again, from the Bible, is that God created the man first, then the woman. He also created the female out of the male. Is that noteworthy? It certainly is.

Let’s ask another question. Is God sexist? Is He a chauvinist? Since God created ALL humans equal, then NO, God is not a chauvinist. Males and females are equal; we’ve established that. By creating the man first and the woman out of the man, He is differentiating between the genders and placing the man before the woman.

Here is where true theology begins to mean something. Instead of focusing on human interpretation and getting upset and thinking God is a male chauvinist, let’s instead see what He has in mind in putting the male first. What is God’s point of view? That is the light of true Biblical understanding. That’s why we can’t just read this verse rapidly, and in English, and think we understand it. Humanly we interpret it according to our knowledge and culture. And that’s not proper theology.

What does God mean when He had the author of Genesis write that the male was the first human, and the female was created out of the male? Strong sums up the Hebrew word זָכָר zâkâr with the most noteworthy sex?

Here’s the key, and as a reader, you are already aware of this. Genesis 1 and 2 are not only talking about a physical creation but also and, more importantly, telling us a spiritual story. Bible translations and reading tend to put more emphasis on the physical, superficial, visible level. That is only the tip of the iceberg. So what is the spiritual underpinning here? One Bible verse sums it up.

The first man (Adam) is of the earth, earthy: the second man (Jesus) is the Lord from heaven

Nevertheless, death reigned from Adam to Moses, even over them that had not sinned after the similitude of Adam‘s transgression, who is the figure of him that was to come (Jesus)

This principle of the physical as the precursor, portraying the spiritual, will come up time and again. When God indicates he created adam in the image of God, it is not just the physical male; it is also the nature and characteristics of adam–all humans–as well. We are now beginning to answer these fundamental why questions. Why is it males have a more prominent role? Females also have a crucial and precious role, as we’ll see next week.

When God indicates he created adam (humanity) in the image of God, it is not just the physical male, it is also the nature and characteristics of adam as well. We are now beginning to answer these fundamental why questions. Click To Tweet

Let’s notice a key characteristic regarding the second man, Jesus.

And he is the head of the body, the church: who is the beginning, the firstborn from the dead; that in all things he might have the preeminence.

Adam and Jesus are the beginning and firstborn, respectively, of the physical and spiritual worlds. This preeminence of Christ corresponds to the noteworthy sex of Adam. Adam had to be the preeminent gender to fit the parallel. Colossians 1:18 confirms this in no uncertain terms, with no less than three descriptions that can all be applied to Adam on a physical plane. Jesus is the Head of the body; Adam is the father of humankind. Jesus is the beginning; Adam was the physical human beginning. Jesus is the firstborn of the living who died. Adam is the firstborn of the physical living.

In so many ways, Adam parallels Jesus in a purely physical way. We shall see a lot more. This preeminence makes the male neither better nor more important than the female. They are equal. But it does give the male a different role from the female, as we’ll see next week. Then we’ll see how the male and female are complementary and how, likewise, their roles are complementary.

Males have a lot to learn about their role. It comes with huge responsibilities as the preeminent gender. It would be better for males to focus on their role, and we are going to see what that role entails.

This blog post is an excerpt from chapter 1.6 of the book Origin of Humankind.

Revise, study, and deepen your comprehension of a fundamental Bible principle. The physical precedes and prefigures the spiritual.

We’ve already discussed this point when we elaborated on the first days of creations and showed that light > truth, dark > confusion. Heavens > God and His ways, depth > Serpent and His ways.

Unfortunately, humans only see the physical and not the spiritual. They do not understand this primary relationship. Some who are religious think we’re painting a human image of God by describing God in human terms. In fact, it’s the other way around. God created humans IN HIS IMAGE. We are physical; He is spiritual. God created many physical characteristics in His image. Some we’ve seen, I’ll show you many others.

With the creation of the first male, we’re seeing he is IN THE IMAGE of the second male, Jesus. We are going to see many more images. That’s why this concept of understanding that the physical prefigures the spiritual is so essential.

God made us and gave us the physical so we can better understand the spiritual.

Check the meanings of the synonyms of preeminence in Col 1:18 to see who Jesus is and why Adam is the preeminent gender. Adam, the first physical human, was a male, and on a purely physical plane has these characteristics. How males use these characteristics is summed up by human nature, choices and is revealed by their behavior. As we know, that behavior often does not represent what it should.

Since you read all the way to here… you liked it. Please use the Social Network links just below to share this information from The Explanation, Male Gender – Its Significance and Why God Created it