The Big Bang Universe – Can its Accelerating Expansion Come to an End? 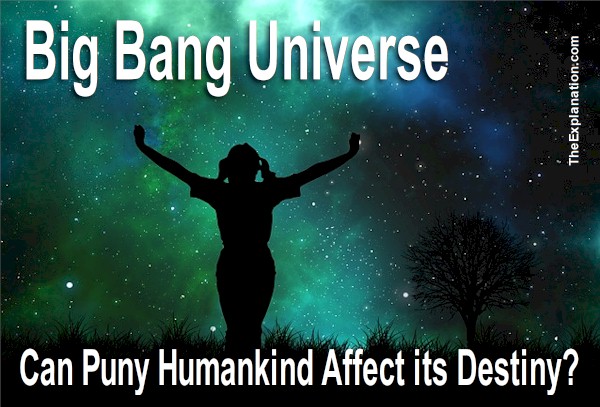 The Big Bang Universe is ever expanding. What are the forces that keep it in equilibrium, and especially can these forces be disrupted, causing its implosion?

The Big Bang Universe is vast, vast, vast. Massive forces keep it in equilibrium. Can humankind disrupt these forces?

We see that Big Bang Universe is a very present subject in the Bible book of Job. The focus is on its formation and vastness. The Bible asks questions as to the incredible forces behind the Universe and humankind’s power on Earth. The mighty versus the puny.
(Origin of the Universe, chapter 6.9)

If this is your first time at this blog, I suggest you review these previous blog posts referring to how God’s finger worked in the formation of the Universe (from the Bible, whether you believe it’s fact or fiction). We have seen that the Biblical Hebrew when God ordained the stars = fashion (blog 1). Furthermore, ordained = firm and stable (blog 2), garnish = royal pavilion and formation (blog 3), formed = dancing sand particles (blog 4), crooked = fleeing constellation, snake = hissing (universal echo) (blog 5) Stretch out = space like a 3-dimensional tent, curtain = fine beaten powder, the composition of the Universe (blog 6). Strong = catch, fasten, cleave, make hard – how the sky was formed (blog 7). Corroborative formation: dust grows hardness clods cleave (blog 8)

We continue the fascinating subject of the Biblical description of the Big Bang Universe and astral bodies in Job 38:38. Today the preceding verse in Job 38:37 will refer to the equilibrium of our Universe. Scientifically, although there’s no equation, we know that the centrifugal and gravitational forces keep celestial bodies in their relative locations. We can count on a starry sky being recognizable year after year.

Tipping Over the Sky!

Indeed, clouds would seem to be a reasonable translation; however, it could fall abysmally short of revealing what the real intention of this verse is. The Biblical Hebrew for clouds is the same word translated sky, this small dust from the wearing of stones in a riverbed that becomes strong in Job 37:18. (Strong’s H7834); this is why I feel Job is discussing the vastness of the Big Bang universe in both verses 37 and 38.

In Job 38:1, God was asking Job ‘impossible-to-answer-by-humans’ questions. Who can count the number of objects in the Big Bang universe? There’s a simple but profound question. We'll never be able to answer it. The number is… Click To Tweet

Let’s stick with the concept of the expanding Big Bang universe and look at Job’s second enigmatic question, “Who can stay the bottles of heaven?” or, as the New International Version translates it: “Who can tip over the water jars of the heavens?.” God is revealing to Job and his friends their pettiness with a jarring question, which in essence says: Who can upset what is going on in the sky? Can you alter the way the universe functions?

What does stay (7901) the water bottles or tipping (H7901) over water jars have to do with the operation of the astral bodies? A few interesting points, as we shall perceive. Let’s look at Strong’s:

שָׁכַב shâkab shaw-kab’; a primitive root; to lie down (for rest, sexual connection, decease or any other purpose):

Strong’s H7901 shows that to tip refers to lie down or cast down, also referring to being lowered or disgraced. In Isaiah 14:8 the trees of Lebanon are personified and say concerning the king of Babylon: “Since you are laid down (H7901), no feller [tree cutter] is come up against us.” Another nuance contrasted here is the trees standing upright while the king is prostrate–stretched out on the ground.

The second emphasis of H7901 is to die, to lie down in death. Jacob instructed his sons as follows: “But I will lie (H7901) with my fathers, and you shalt carry me out of Egypt, and bury me in their burying place” (Gen. 47:30). Lying down with one’s fathers is synonymous with a human’s death. (It is not used of animals or inanimate objects.) The concept is that when one dies, he no longer stands upright.

The basic idea is that of putting an end to any normally operating process; this is apparent in the following verse, where King David terminates the ordinary course of events for the nation of Moab. “David also defeated the Moabites. He made them lie down (H7901) on the ground and measured them off with a length of cord…” (2 Samuel 8:2).

A second verse adds an element that will help us better understand God’s question about tipping over the water jars of the heavens. An example explains how a mother’s son died, “And this woman’s child died in the night; because she overlaid (H7901) it, (1 Kings 3:19). In other words, she smothered or suffocated her son.

What is the connection between smothering and water jars (H5035)? Once again, the key is to understand the Hebrew root of these words.

נֶבֶל nebel neh’-bel; or נֵבֶל; from H5034 (נָבֵל); a skin-bag for liquids (from collapsing when empty); hence, a vase (as similar in shape when full); also a lyre (as having a body of like form):

נָבֵל nâbêl naw-bale’; a primitive root; to wilt; generally, to fall away, fail, faint; figuratively, to be foolish or (morally) wicked; causatively, to despise, disgrace:

B.C. However, it can also clearly demonstrate that skin bags were a standard method for storing water, wine, or other liquids.

In today’s Western technological society, we don’t think in these terms, that’s why we have to discuss root meanings. The point is that a skin container naturally collapses when it is empty; this is the relationship between Strong’s H5035 and H5034, the skin bag, and wilt or fail. In English, we lose the fundamentals of Biblical Hebrew. When we look at the original, the meaning jumps out at us.

Who can keep the skin bag from collapsing? It takes something special to halt an automatic process of degradation and sagging as we see in Psalm 1:3, “And he shall be like a tree planted by the rivers of water, that brings forth his fruit in his season; his leaf also shall not wither; (H7901) and whatsoever he does shall prosper.”

Normally a leaf shrivels up–like the collapsible receptacle when it is empty.  Elsewhere in Job, the concept of the crumpled container is conveyed by the term nought. “And surely the mountain falling comes to nought (H7901), and the rock is removed out of his place” (Job 13:18).

So then, when God says, “who can tip over the water jars of heaven?” it is referring to who can deflate the universal structures of the heavens? Who can collapse the planetary and solar systems? Who can stop the Big Bang universe from expanding? Who can invoke the gravitational forces to cause the Big Crunch?

When God says ‘who can tip over the water jars of heaven?’ (Job 38) It means, Who can collapse the planetary and solar systems? Who can stop the Big Bang universe from expanding? Who can invoke the gravitational forces to cause the… Click To Tweet

Meditate about the Big Bang Universe, and you’ll realize there’s a very delicate and yet highly intricate system of centrifugal forces (pushing things outwards) and gravitational forces (pulling things inwards) that allows every astral body to maintain its perpetual whirling motion and yet be part of a whole calibrated system. It’s not easy–even impossible–to explain, but this is a fact.

God is inquiring whether Job, his friends, and humankind can tamper with this astonishing system. The obvious answer is no. But let us retain the lesson of the full skin-bag–because of the equilibrium in our expanding Big Bang universe.

Galacti is wondering, does the Bible specify any date for Big Bang, or is it silent?

God does not address this issue. It might have cleared up a lot of difficulties had He done so, but He didn’t.

What about science’s affirmation that the earth has existed for only 4.5 billion years? Again, silence. The concept of Big Bang, an initial explosion, followed by an expanding universe in all directions means that galaxies and stars and planets have formed (and are still forming) and taken their place in the vastness of space over the entirety of the 13.7 billion years.  Earth, then, took its place 9.2 billion years after Big Bang.

Concerning the coming into existence of the physical universe, Big Bang’s explosion rippled out, creating space by depositing debris, composed of particles and gas, in every direction. As the millions and billions of years elapsed, the granules clustered into the formations of galaxies, constellations, nebula, nova, and other astronomical phenomena we now observe in our universe.

Stay with me; later on, we will see some events that took place on Earth before the story (fairytale?) of Adam and Eve; activities that would’ve happened sometime during those 4.5 billion years of Earth’s existence.

This blog post is an excerpt from chapter 6.9 of the book Origin of the Universe

In Job 38.37, lookup and verify the various usages of stay – tipping (H7901). Go over to UnlockBibleMeaning.com, find Job 38.37, switch to Strong’s concordance, click on H7901, hover at the bottom of the reference, and click on Hebrew Concordance for H7901.

Read the verses that contain this same Biblical Hebrew word and begin to construct the story it is telling you.

Four hundred years ago, at the time of the KJV translators, liquids were stored in upright vessels, mainly earthenware made of clay. Bottles, however, had already been around for about 2,000 years, and the bottle industry got underway in America in the 1600s. Barrels were commonly used to transport commodities like herring, oil or wine. Glass bottles might have been somewhat of a rarity when they translated Job 38:37 using the phrase: “who can stay the bottles of heaven?”

However, the presence of collapsible skin-bags was not familiar, and knowledge of the shape and nature of space was not available to the translators. Only today can we grasp the relationship of a full skin-bag with the fullness of the Big Bang Universe.

What do you think of the description of this equilibrium of inflated space compared to a skin-bag full of liquid? Would you consider this as some evidence regarding the Bible narrative? How much evidence constitutes the need for a serious REconsideration of the value of this sacred book we call the Bible?

Since you read all the way to here… you liked it. Please use the Social Network links just below to share this information from The Explanation, The Big Bang Universe – Can its Accelerating Expansion Come to an End?