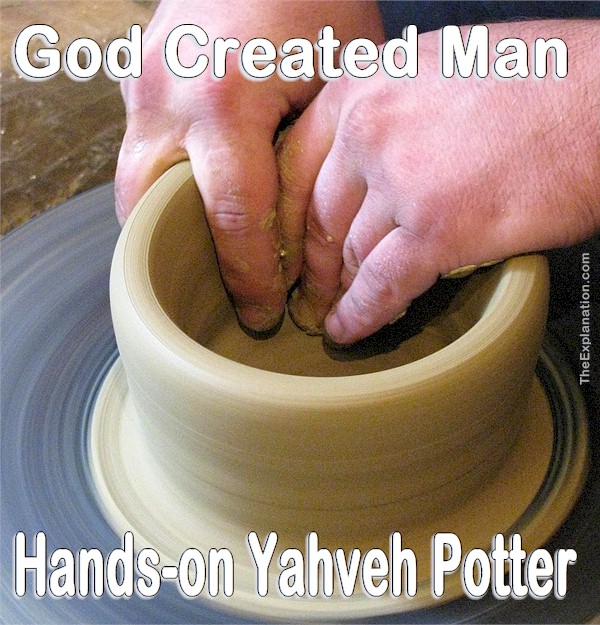 God created man, so says the Bible. One of, if not, the most significant events in history. Here’s The Explanation you’ve never heard before.

God created man is the translation of Genesis 1:27 from Elohim bara adam. I’m simplifying, but not changing, the original Biblical Hebrew presentation. It follows on from verse 26, which states Elohim asa adam; God made man. Bara means created ex-nihilo from nothing, instantly. On the other hand, asa is a very common verb meaning to make in the largest, literally and figuratively, sense possible.
(Origin of the Humankind, chapter 3.1)

In Genesis 2:7, we have a different format. YAHVEH Elohim formed man. Yahveh Elohim yatsar adam. The addition of Yahveh and a new verb, yatsar. In English and any other language, we just read over this, mostly with not much thought; this is a historical event of prime importance. Check the Biblical Hebrew here, UnlockBibleMeaning.com

The Explanation has already shown that Yahveh is the Word, Jesus Christ, who is The Second Adam (1 Corinthians 15:47). What we have in Genesis 2:7 is the future Jesus Christ, the Son of God, forming the first Adam. We have the Messiah forming the man whom He knew He’d have to come and die for, and save some 4000 years later. We have the beginning of the most Machiavellic plan, in the most positive way, you can imagine; this is a highly uplifting intrigue that whips any modern novel.

It’s the story of Yahveh creating a man who would immediately stab his very creator in the back. With his progeny, humankind would commit the most heinous crimes for whom this same Yahveh Creator would die ignominiously to save the man from himself. This unique scenario summarizes the whole plan of God.

7 And the LORD God formed (H3335) man of the dust of the ground, and breathed into his nostrils the breath of life; and man became a living soul.

8 And the LORD God planted a garden eastward in Eden; and there he put the man whom he had formed (H3335).

יָצַר yâtsar yaw-tsar’; probably identical with H3334 (יָצַר) (through the squeezing into shape); (compare H3331 (יַצַע)); to mould into a form; especially as a potter; figuratively, to determine (i.e. form a resolution):

יָצַר yâtsar yaw-tsar’; a primitive root; to press (intransitive), i.e. be narrow; figuratively, be in distress:

KJV – be distressed, be narrow, be straitened (in straits), be vexed.

This usage is the first time for this Biblical Hebrew word, so we want to pay particular attention to it. Yatsar summarizes the entire plan of God, the Maker, forms man from the earth. The Potter has a purpose in fashioning man. Shortly, we’ll see something else, significant, that Yahveh also purposefully fashioned concerning humankind. It has to do with this same verse 7 but, you’ll have to be patient for that.

Genesis 2:8 also uses Yatsar, and there’s one other time in this book, in 2:19 where it says God formed every beast of the field and every fowl of the air. Some would say this indicates animals and humans are of the same stuff. Not by a long shot, as we shall see. The ground brought forth the animals (Genesis 1.), whereas Yahveh hand-crafted the first man. When God created man, it was literally a hands-on experience. And, in one sense, He’s never taken His hands off since then.

Notice that H3335 has the Biblical Hebrew root H3334. This root adds significant comprehension to how a potter crafts his wares. He presses it or narrows his piece of clay. The potter deftly applies pressure with their fingers, each finger, even the palms of their hands to shape the final creation. Only the potter’s hands can accomplish such artful work. Figuratively, this is referring to God molding and shaping our spiritual character.

There’s so much in the Bible about this subject. Here, I cannot get into it but, can you see that when the author of Genesis wrote in Genesis 1, God created man he was talking generally. Whereas, in Genesis 2, Yahveh formed man is so much more descriptive of the relationship of Jesus Christ to every single human being.

A companion Biblical Hebrew word of yatsar is tsur (using the same two letters: צ and the ר). Notice how the meaning is so similar to press, narrow, and straighten. Here it’s compressed and confined. It also translates fashioned like yatsar; this becomes very clear when you understand the 7 Keys to Master Biblical Hebrew.

צוּר tsûwr tsoor; or צֻר; from H6696 (צוּר); properly, a cliff (or sharp rock, as compressed); generally, a rock or boulder; figuratively, a refuge; also an edge (as precipitous):

צוּר tsûwr tsoor; a primitive root; to cramp, i.e. confine (in many applications, literally and figuratively, formative or hostile):

Deuteronomy 32:3-4 uses the verb yatsar. Because I will publish the name of the LORD: ascribe you greatness to our God. 4 He is the Rock (H6697), his work is perfect: for all his ways are judgment: a God of truth and without iniquity, just and right is he.

Yahveh, the LORD, the Word is the One who was compressed and fashioned by His Ministry on Earth to be our Rock. He is the Petra (Matthew 16:18), the foundation of the Church. I don’t have time to expand this here. Do you see how God created man? How Yahveh fashioned humans? How He was fashioned to become that solid Rock the foundation of the Church and how the Rock continues to fashion humans. Just one Biblical Hebrew word encapsulates the entire Gospel. And The Explanation of yatsar is far from being exhausted.

Isa 45:18 also presents this word yatsar, which will now take on a much deeper meaning for you.

For thus says the LORD that created the heavens; God himself that formed (H3335 yatsar) the earth and made it; he hath established it, he created it not in vain, he formed (H3335) it to be inhabited: I am the LORD; and there is none else.

We know that earth was established in the Universe billions of years before Yahveh formed the man. God says He formed Earth to be inhabited. Humans were part of His plan from the start! Remember from Strong and the KJV translators, yatsar means to determine, form a resolution, have a purpose. Yahveh had and definitely still has that same purpose for both Earth and Humankind, whom He placed on Earth starting when God created man.

God hand-crafted that first man, showing the intimate relationship He has with His ultimate creation, humankind. That man is referred to as male in Genesis 1:27. Do you recollect what one of the meanings of the Biblical Hebrew zachar translated male is simply, REMEMBER? Well,

Is the world saying, God, is not in the picture? He didn’t put us here? Has humankind got it upside down? God did create man and all humans through Adam and Eve. He had, and certainly still has, a purpose for both Earth and humankind today. The Explanation is here to help you understand what Yahveh, through His Words, especially the Biblical Hebrew, has to say about these major questions that need answers. Remember.

This blog post is an excerpt from chapter 3.1 of the book Origin of the Humankind

Another derivative of yatsar is tsar (without the yod); in this case, it becomes a two-letter root. Bible readers are familiar with this because it is the name Tsur or Tyre; today, the city, also known as Sour, is on the coast of Lebanon. Look at the Biblical Hebrew and compare the letters. But, especially notice the meaning.

There are several other derivatives of H3335, formed that like this one refer to pressed. Think about the history of Tyre, a narrow (something pressed becomes narrow) strip of land that stretched into the sea where it was a well-protected rock fortress. Do you see the relationship with the Rock forming and sometimes pressing us to into the shape He wants us to have?

Since you read all the way to here… you liked it. Please use the Social Network links just below to share this information from The Explanation, God Created Man. Why Bible says, God Formed Man