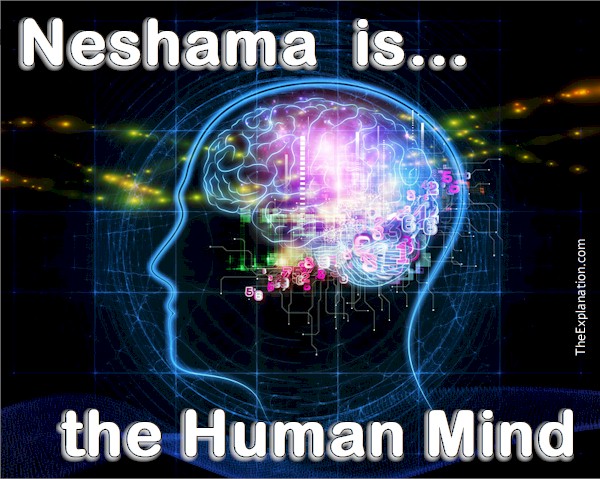 Neshama meaning? God breathed this into the first human. Neshama conferred on Adam and all human beings all the singularities that define humankind.

What is the meaning of neshama? God breathed neshama into the first human being. Neshama is the human mind that endows us with our human singularities.

Neshama meaning? A question that religion has overlooked. And with which science, particularly and psychology grapple. Finally, we’re getting a sensible answer that breaches the chasm which separates these two disciplines. It is the human mind with which solely humankind is endowed.
(Origin of Humankind, chapter 3.9)

If you’ve come across this blog post for the first time, then please know that it is part of a larger work. See all the context, and read it online, click here.
You can follow along by using the online Bible, the Interlinear Bible, Strong’s Concordance and the Hebrew/Greek Concordance at UnlockBibleMeaning.com
To understand how I’m using Biblical Hebrew, read this short presentation of 7 keys to Master Biblical Hebrew
Dig for Bible Study gems to enhance your understanding: See ‘Further Study’ suggestions at the end of this blog post.

Here’s a summary of what we’ve covered in Genesis 2:7 so far about the creation of the first man. Yahveh formed man out of dust, the most sterile part of the ground. Yahveh, the Potter, the future Jesus, then breathed into his nostrils. That man is called a living soul composed of a material body and an immaterial singularity, akin to the mind, that only humans possess; this is a result of the breath of life which is the neshama, which again only humans and God possess, revealing a relationship between humans and God.

This neshama meaning confers lives (plural) on humans, confirmed by reference to resurrections (plural). Hence neshama meaning is better rendered by the divine essence of lives. Neshama is always associated with ruach, both of which are possessed by God and humans.

God breathed neshama into the first man, endowing humanity with human singularities. Coupled with that, He also placed the ruach in man. This duo is inseparable when it comes to humans. Without them, there is NO LIFE. Without neshama, the being is NOT HUMAN. Neshama meaning? The element that differentiates humans from animals is not the brain. It’s the mind.

We are now going to see a few verses about animals and humans and how God transformed one into the other! I realize this sounds preposterous, but if God can create, He can also transform His beings. We need to understand what makes humans human and animals animal. What is the mechanism?

24 This is the interpretation, O king [Nebuchadnezzar], and this is the decree of the most High, which is come upon my lord the king:

25 That they shall drive thee from men, and thy dwelling shall be with the beasts of the field, and they shall make thee to eat grass as oxen, and they shall wet thee with the dew of heaven, and seven times shall pass over thee, till thou know that the most High rules in the kingdom of men, and gives it to whomsoever he will.

33 The same hour was the thing fulfilled upon Nebuchadnezzar: and he was driven from men, and did eat grass as oxen, and his body was wet with the dew of heaven, till his hairs were grown like eagles’ feathers, and his nails like birds’ claws.

34 And at the end of the days I Nebuchadnezzar lifted up mine eyes unto heaven, and mine understanding (H4486) returned unto me, and I blessed the most High, and I praised and honoured him that lives for ever, whose dominion is an everlasting dominion, and his kingdom is from generation to generation:

This account is amazing, by any means. It all revolves around Nebuchadnezzar losing and regaining his understanding/reason (verses 34 and 36). It is not the same Hebrew word as Job 32:8, which we saw last week. But there is a spirit (H7307—ruach) in man: and the inspiration (H5397 – neshama) of the Almighty gives them understanding (H995). In English, H4486 (Daniel 4:34) and H995 (Job 32:8) are both translated with the same English word understanding. The king forwent his understanding/reason for seven years. He lost his human reasoning capacity. We have a term for this; Nebuchadnezzar lost his mind. This mind is akin to neshama. That is the neshama meaning. God removed or suppressed the neshama, and the king became like a beast.

Neshama meaning? It is a definite element that clearly differentiates animals from humans. It is the human mind.

This event with Nebuchadnezzar went so far that he could not even take care of his physical needs. His hair and his nails grew tremendously. Some animals naturally have long hair, but you never see animals that have to trim their hair and nails regularly. Only humans have to groom themselves this way. Without neshama, a human being can NOT take care of their human needs. I don’t want to get into it here, but this is what happens when humans lose their minds for whatever reason. It is a sad state of affairs.

I don’t want to expand this subject but verse 35 explains why Nebuchadnezzar went through this episode (trial) in his life. God wanted him to realize that one of the most powerful kings on Earth (if not the most powerful, because of what he symbolizes prophetically) is nothing in God’s sight and that God does as He wills. He will accomplish His plan for the King and all of humanity.

But, the point here is that God TOOK Nebuchadnezzar’s neshama, held on to it for seven years and then GAVE IT BACK to him. Not only did He give it back during his lifetime, but God enhanced his neshama and kingdom with additional blessings as the end of verse 36 points out. All other human beings will have their neshama given back to them at the resurrection. (Job 34:14 God collects the neshama and the ruach on death. For humans this duo always stays together). In the meantime, God is storing it, just as He did with Nebuchadnezzar. Neshama meaning? Nebuchadnezzar still had his brain, but his mental mind was taken from him and will be restored later.

Here is the second unusual Bible story of an animal with human capacities – Balaam’s ass. As such, this is the opposite scenario of Nebuchadnezzar. Most think this is some kind of fantasy. How can an ass speak?!

21 And Balaam rose up in the morning, and saddled his ass, and went with the princes of Moab.

22 And God’s anger was kindled because he went: and the angel of the LORD stood in the way for an adversary against him. Now he was riding upon his ass, and his two servants were with him.

23 And the ass saw the angel of the LORD standing in the way, and his sword drawn in his hand: and the ass turned aside out of the way, and went into the field: and Balaam smote the ass, to turn her into the way…

27 And when the ass saw the angel of the LORD, she fell down under Balaam: and Balaam’s anger was kindled, and he smote the ass with a staff.

28 And the LORD opened the mouth of the ass, and she said unto Balaam, What have I done unto you, that you have smitten me these three times?

29 And Balaam said unto the ass, Because you have mocked me: I would there were a sword in my hand, for now would I kill you.

30 And the ass said unto Balaam, Am not I your ass, upon which you have ridden ever since I was yours until this day? was I ever wont to do so unto you? And he said, Nay.

31 Then the LORD opened the eyes of Balaam, and he saw the angel of the LORD standing in the way, and his sword drawn in his hand: and he bowed down his head, and fell flat on his face.

A talking ass! But, it’s not just talking, it’s REASONING. Look at verse 30. This ass possesses a human characteristic. Obviously, I have no way of knowing exactly what God did here. I can say He conferred on the ass the characteristics of understanding that come from neshama. God gave the ass aspects of the human mind. Again, I don’t know whether He changed the ass’s vocal cords so it could speak, I don’t know whether it moved its lips in sync! But talking and language are solely human characteristics. And the ass had them!

Nebuchadnezzar and Balaam’s ass. Remarkable examples. Incredible lessons about the human mind. Neshama meaning? God breathed the human mind into the first man. That was the very first time any being, on Earth, received a MIND, and thus Adam became human.

Everything and I mean everything physical before Adam, that lived on Earth was not human. There was prehistoric life on Earth. Archaeology and Science have dug up and analyzed and proven beyond a shadow of a doubt, for those who want to see, that prehistoric life existed on planet Earth. But NONE of those beings ever had a neshama. They did NOT HAVE A HUMAN MIND.

So, what did prehistoric beings have that allowed them to do some incredible things? They raised animals, harvested crops, even built dwellings, performed burial rites, and lived social lives. We shall discuss that in a few blog posts.

If you know someone. or a group, interested in the raging controversy between theology and science, feel free to share this blog post using the social media and email icon links below. Much appreciated.

This blog post is an excerpt from chapter 3.9 of the book Origin of Humankind

Since you read all the way to here… you liked it. Please use the Social Network links just below to share this information from The Explanation, Neshama Meaning? The God Given Human Mind