Made in the Image of God – The Astounding Definition 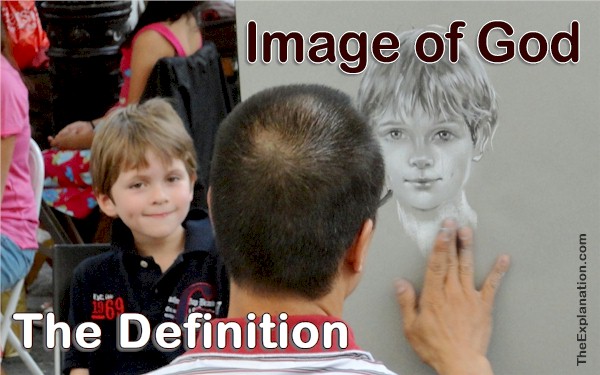 Made in the Image of God, created in the image of God. A couple of statements that sound blasphemous! However, they are biblical; here’s the definition.

God made humans in His image. Here’s the definition of what that means.

Made in the image of God is one of the more controversial concepts of the Bible. Knowing its definition helps us identify Who God is, who humans are, and what our relationship is. Here’s the definition.

If you’ve come across this blog post for the first time, then please know that it is part of a larger work. To see the entire context, which you can read online, click here.
You can follow along by using the online Bible, the Interlinear Bible, Strong’s Concordance and the Hebrew/Greek Concordance at UnlockBibleMeaning.com
To understand how I’m using Biblical Hebrew, read this short presentation of 7 keys to Master Biblical Hebrew
Dig for Bible Study gems to enhance your understanding: See ‘Further Study’ suggestions at the end of this blog post.

We have seen that God made all living things (seed, birds, fish, animals) after their kind. Whereas He created humans with the image and likeness of God. We saw some outward attributes of humans (fingers, hands, voice) as well as their capacities like enjoying a meal or tasting wine, which are like what God can do if He so pleases to do it. God doesn’t need any of these outward attributes or capacities to accomplish what He does.
(Origin of Humankind, chapter 1.3)

On the other hand, humans do need them for survival and enjoyment. Having these attributes on a physical level makes us like God, who can also exercise them on a spiritual level, a different realm that is difficult, maybe even impossible, for humans to fathom.

Genesis 1:26 God also adds: “Let us make man in our image (H6754)…”. Today we’ll see this term “image” can refer to attitudes and thoughts that originate in the mind or the heart of man. Whereas likeness to God refers more to external similitude, made in the image of God refers more to the ability to have mental and conscious capacities.

Try a little exercise here. Replace the word image in the phrase, “humans were made in the image of God,” with the words Strong and the King James Version of the Bible translators use to render tselem (H6754). For instance, “humans were made in the shade of God.” Substitute the words phantom, illusion, resemblance, shew even the word idol. Say the various phrases in your mind or out loud. Listen to the meaning. Humans are and have a pale, very, very pale resemblance to what God is.

This Biblical Hebrew word tselem (H6754) is never translated idol in the KJV, but it does refer to physical idols, “…all their molten images (H6754)….” Idols are something cast or carved to represent God and worshipped in His place. We shall return to this human – idol – God relationship shortly.

In the meantime, let’s examine the mental and conscious—rather than the physical, outward—aspect of tselem (H6754) by reading a context that ends with the use of our term image (H6754). To help you quickly grasp the meaning of this Psalm, I’ll add a few comments in brackets (sk: comments).

The author of Psalm 73 was having a rough time with a question that many wrestle with today: Why is it that certain wicked and immoral people prosper? Read the answer and how God will ultimately view their evil character, which I’ve highlighted in red, summed up using the term image (H6754) in verse 20.

2 But as for me, my feet were almost gone; my steps had well nigh slipped. (sk: the psalmist has an incorrect outlook about those doing wrong).

3 For I was envious at the foolish, when I saw the prosperity of the wicked.

4 For there are no bands in their death: but their strength is firm.

5 They are not in trouble as other men; neither are they plagued like other men.

6 Therefore pride compasses them about as a chain; violence covers them as a garment. (sk: their repugnant moral fiber)

7 Their eyes stand out with fatness: they have more than heart could wish.

8 They are corrupt, and speak wickedly concerning oppression: they speak loftily…

16 When I thought to know this, it was too painful for me; (sk: the psalmist couldn’t see why God was allowing this to go unpunished)

17 Until I went into the sanctuary of God; then understood I their end. (sk: he finally comprehends what will happen, in the end)

18 Surely you did set them in slippery places: thou cast them down into destruction.

19 How are they brought into desolation, as in a moment! they are utterly consumed with terrors.

This fundamental problem that confounds many believers and non-believers alike, why villains prosper, finds its epilogue here. The answer is God will take care of them in due time. I will not expand on that here, back to the subject of made in the image of God.

Notice verse 20, when God intervenes, He will despise their image (H6754). This image refers to these villains and their attitudes. I’ve highlighted these attitudes in red. This image is a reflexion of the negative side of the dual nature of humans.

What I would like you to grasp here is that this mindset and arrogance, these attitudes are part and parcel of what issues from the human mind, our consciousness. Of course, God is not wicked and foolish; He is righteous and wise. Negative and positive human nature characterize humans. But the point is that as God uses His mind for wisdom, so humans can use their minds to reason positively and find answers as to what will ultimately happen to these wicked, as the psalmist did.

No living thing, other than humans, has this capacity to conjure up plans and do complex reasoning that is both positive and negative. God alone can reason solely positively. God reasons, as do humans. In this, humans possess the image of God.

Another verse in Psalm 39 reinforces this similitude of human and Godly perceptions confirming that God created us with His image. Here tselem (H6754) is used with the translation shew (show). The translators added the word vain, but in the Hebrew, it is absent and used a little later in the same verse. Verse 6: “Surely every man walks in a vain shew: surely they are disquieted in vain (H1892 hevel): he heaps up riches, and knows not who shall gather them.”

The point being that in shew reveals this human attitude of focusing on accumulating money and then worrying about it. Humans have negative and positive attitudes. God only reasons positively, challenging to grasp I grant you, but both humans and God have attitudes and in that humans are made in the image of God.

Firstly, what we call human attitudes, human beings on planet Earth solely possess thoughts, perceptions, awareness, judgment, insight, consciousness, understanding, and all the other attributes we associate with the mind. Secondly, God also possesses every one of these same attributes. God’s attributes are both much more excellent and better oriented than human beings. But, in that humans alone possess these same attributes indicates our likeness to the image of God. We both show (the other KJV translation of H6754), or manifest, the same mental and psychological faculties.

As I write this, I’m sitting here thinking, what will someone reading this blog post for the first time be thinking about now! It does sound strange to talk about God in the context of mental and psychological faculties. Realize that this post is in the continuity of 300 previous posts leading up to why and how I’m expressing this subject concerning the Bible and God. Please also realize that if I use terms like mental and psychological, it is only so we humans can better understand God and particularly our relationship to Him. God’s Word is replete with contexts the show both God and humans having the same mental makeup. Here are a few:

God and every human being have similar attitudes and emotions. God has compassion (Psalm 86:15), patience (Rom. 15:5), and goodness (Psalm 107:8,15) BUT, and this is an essential fundamental difference between man and God: God has a perfect image, pure gold character. “It is impossible for God to lie” (Heb. 6:18). His words are pure (Psalm 12:6). On the other hand, man’s character leaves much to be desired. It is imperfect and tarnished.

I don’t want to belabor that aspect because what we need to retain is the definition of made in the image of God. That image of God, that likeness of God. Humans have the same mental and physical capacities as God, albeit on a much, much, much inferior level; this is a key to understanding our frail human existence concerning All-Powerful God.

This blog post is an excerpt from chapter 1.3 of the book Origin of Humankind.

Verify and corroborate this comparison of human attributes with God’s attributes.

Go to UnlockBibleMeaning.com and search for words like righteous indignation, anger, or faithful. We know we humans exhibit these characteristic traits. What about God? As you read the Bible, begin to see if you haven’t already, these attitudes and better comprehend the relationship between humans made in the image of God and God.

You’ll see these traits of God are on the positive side of the ledger, whereas if you do the same study for humankind, the result is different. The works of humans tend towards the negative side, although, of course, humans can have very positive attitudes and accomplish very positive endeavors.

Check Psalm 39.6, “they are disquieted in vain (1892 hevel)” and see similar words used by Strong and the KJV translators to describe the penchants of the characteristics of humans. We are created in the image of God. Right now, it’s rather empty.

In Audit of the Universe, I continually asked the question, is the glass of peace and prosperity getting fuller or emptier? If the human penchant is vain-empty, do you see the answer and the reason for the correct answer to this question?

Since you read all the way to here… you liked it. Please use the Social Network links just below to share this information from The Explanation, Made in the Image of God – The Astounding Definition