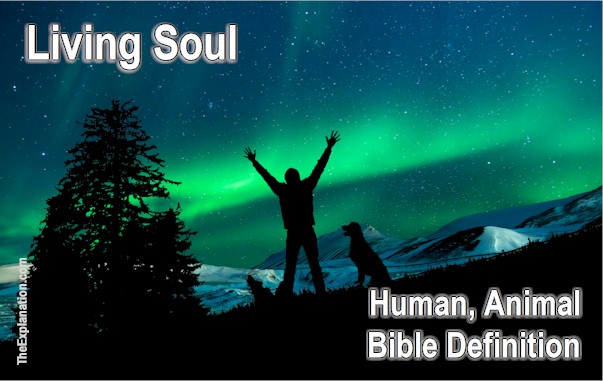 A Living Soul. The definitive definition. According to the Bible, both humans and animals are living souls. So what’s the vital difference between them?

If you can NOT answer the question, you do NOT know who you are, nor how you differ from an animal or a worm :); This is fundamental spiritual and psychological understanding, so let’s get it right. In Genesis 2:7, the phrase nefesh chaya translated living soul in the King James Bible, occupies center stage in the entire Bible story.
(Mind-Body Problem Solved, Chapter 26 – Table of Contents)

Most Bible readers do not realize that Genesis 1 includes nefesh chaya no less than FOUR times, all referring to animals. That’s right, animals AND humans are nefesh chaya, living souls if we use the Genesis 2:7 translation.

In Genesis 1 The word nefesh (H5315) appears four times in verses 20, 21, 24, and 30 where it’s translated creature and life. It refers to fish, beast, fowl and everything that creeps on earth. In other words, nefesh refers to every single living creature God created up until the first human.

Please verify this at UnlockBibleMeaning.com where you’ll find an Interlinear and Strong’s numbers. See it with your own eyes, don’t take my word for it. It is so important that I’ve also included an image of both the Interlinear and KJV translations. Here’s the point. Both these words, nefesh and chaya, are present. They are used together as nesfesh chaya  in verse 30, translated in the Interlinear, “in which life is living.” (reading Hebrew right to left). Whereas in the KJV, the translators omitted a word with “wherein is life.” 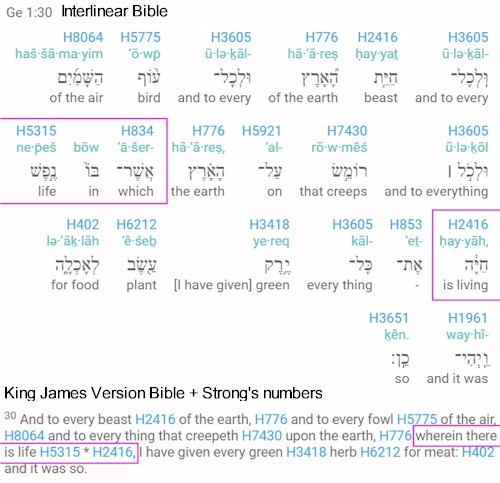 The Bible says it is the ruach. This life-giving spirit confers on beasts, fish, fowl, and crawlers their instinct and special traits for sleeping, hunting, eating, and reproducing. The specific survival qualities each species demonstrates and has always displayed since their creation.

God’s ruach (careful, this has a small r not the capital R associated with the Holy Spirit) animates every living animal as we saw two chapters ago.

19 For that which befalls the sons of men befalls beasts; even one thing befalls them: as the one dies, so dies the other; yea, they have all one breath (H7307 – ruach); so that a man has no preeminence above a beast: for all is vanity. (Sam: when it comes to breathing, humans, and animals are identical)

20 All go to one place; all are of the dust, and all turn to dust again. (Sam: God created animals and humans from the earth, dust, and that’s where their bodies return)

The proper translation of Genesis 1:30 tells us there is an essence, something living within a live breathing animal. This essence is the ruach, the spirit. This is the first error of science, it doesn’t believe there’s a non-material essence. From this point on, there’s irreconcilable understanding.

But that’s not the only comprehension problem. The ruach, the essence animating animals, emanates from God, that’s clear, but more precisely from God’s Ruach, the Holy Spirit. The Bible point, here and elsewhere, is the Holy Spirit is an Essence, the Essence of God. Why can The Explanation affirm this? Because of

By the word of the Lord were the heavens made; and all the host of them by the breath (H7307) of his mouth.

You send forth your spirit (H7307), they are created: and you renew the face of the earth.

God’s breath (H7307) and His Spirit (H7307) are the same creative Essence. This is the first error of traditional Christian religion, it doesn’t believe the Holy Spirit is an Essence. So from this point on, there’s irreconcilable understanding.

Until mid-Day 6 of Creation (Gen. 1:25, 30), it’s been about animals multiplying and eating. In one word, animals survive as nefesh chaya, the identical phrase we see in Gen. 2:7. From this point forward, it’s about humans and how they thrive. Let’s analyze Genesis 2:7.

And the LORD God formed man (adam) of the dust of the ground, and breathed into his nostrils the breath of life; and man became a living soul (nefesh chaya).

Genesis 2:7 refers to nefesh chaya as the moment of creation of the first human. What is essential to understand is this is NOT the same nefesh chaya as in Gen. 1:30. How can The Explanation affirm this?

God breathed the neshama chayim  (nishmat chayim in Hebrew) into the human’s nostrils. There’s no such reference to animals. Gen. 2:7 is the very first mention of neshama.

The nefesh chaya in Gen. 2:7 for humans includes three elements.

The nefesh chaya in Genesis 1:30, referring to animals, ONLY has the ruach; there’s no neshama. This puts humans in a category of their own. The human species, the human race. In Biblical terms, following on from the vocabulary used in Genesis 1, after their kind, we can say, “And God made humans from the dust after their kind.”

And the human kind is heavily related to God because only God and humans possess neshama! That’s the meaning of “God created humans in His Image after His Likeness.”

Genesis 2:7 tells us there is a material body + the immaterial ruach + the immaterial neshama. ALL three together make up the nefesh, and the KJV translators used one word, soul. And science and religion are at loggerheads internally and with each other; each lacks comprehension of this primary subject.

The entire Bible is the story of humankind, of billions of nefesh chaya. And neither science nor religion understand what a human being is. Wow. How can they get the story right if we don’t know to what or whom we’re referring?

In the last two chapters, we saw the chasmic difference between devices with firmware and those with an operating system and computer programs. The first is limited to ONE task; the second is analogous to humans with unlimited imagination. It’s identical to the animal living soul and the human living soul.

The animal living soul is a body with ruach, instinct allowing its possessor to live one life trajectory. It could be a beaver, a flamingo, an orca, or a cheetah. But it will always be what the ruach that animates it designates it to be. It can never develop its talents beyond the limits set by its ruach. It can never change its animal status and evolve into a higher or any other species. However, the number of variations within the limits of its ruach is unlimited, explaining multiple breeds and diversity within the same species.

On the other hand, the human living soul possesses neshama and consciousness, conferring the five traits of purpose, function, socialization, rulership, and reasoning. On that base, each human living soul can build their own dream by adding and developing their choice of ruach-programs. They can become a scientist, sportsperson, author, cook, caretaker, or a million other types of person.

This final chapter of the fourth section of the book Mind-Body Problem Solved is devoted to ruach the animator of living souls. We have to respect all life, but all life is NOT equal. There’s animal life solely animated by ruach then, far-and-away superior, there’s human life animated by neshama and ruach.

The chasm between animal living soul and human living soul is impassable. Humans are not animals and they did NOT evolve from fauna. Humans are humans because God breathed neshama into the nostrils of the first human and gave him ruach, setting the stage for the story of humankind.

To be straightforward with my readers, if we don’t integrate this Bible wisdom, we cannot understand what it is to be human, the story of humankind, or the Bible, so please meditate on this subject for clarity’s sake.

We’ll end this chapter with a brief reference to the last chapters of the book Inventory of the Universe, entitled The Human/Animal Dilemma. I wrote this book to address the common sense of readers who do not believe in a Higher Power. Not once in this book is there any reference to a Superior Being.

However, the idea is to reveal how there are so many coincidences and interdependent just-in-time systems in our Universe that there is no way they all just happened. Animals are predictable; humans are unpredictable. You can always know what a young lion will turn out to be but you can never know what a young child will grow up to be.

Here’s a summary of the insurmountable contrasts between animal living souls and contrasting human living souls.

Humans and animals, biblically, are both living souls. Only the spiritual components, neshama and ruach reveal the vast abyss between them. In animals, ruach is their instinct; in humans, their mind and ability. But ruach has many other mysteries we’ll unravel.

Since you read all the way to here… you liked it. Please use the Social Network links just below to share this information from The Explanation, Living Soul. The Fascinating Bible Meaning for Humans & Animals